Briquette production by the informal sector: The case of UCLA in Iloilo City, Philippines 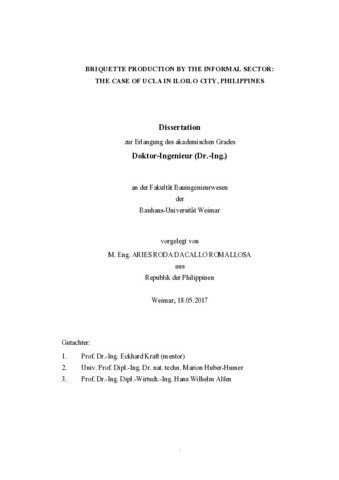 The construction and operation of a sanitary landfill (SLF) in the Philippines presents concerns on the regulation of the activities of the informal sector in the area. In anticipation of these directives, an association of informal waste reclaimers group called Uswag Calajunan Livelihood Association, Inc. (UCLA) was formed in May 2009. One option identified was the waste-to-energy activity through the production of fuel briquettes. With the availability of raw materials in the area, what was lacking then was an appropriate technology that would cater to their needs. This study, therefore, presented the case of UCLA on how socio-economic and technical aspects was integrated for the development and improvement of a briquetting technology needed in the production of quality briquettes as part of their income generating activities. A non-experimental posttest only design was utilized for the collection of descriptive information. Descriptions and discussions were also made on the enhancement of the briquetting machine from the first hand-press molder developed until the finalized design was attained. Results revealed that the improved briquetting technology withstood the wear and tear of operation showing a significant (P<0.01) increase on the production rate (220 pcs/hr; 4 kg/hr) and bulk density (444.83 kg/m3) of briquettes produced. The quality of cylindrical briquettes produced in terms of bulk density, heating value (15.13 MJ/kg), moisture (6.2%), N and S closely met or has met the requirements of DIN 51731. Based on the operating expenses, the briquettes may be marked-up to Php0.25/pc (USD0.006) or Php15.00/kg (USD0.34) for profit generation. The potential daily earnings of Php130.00 (USD2.95) to Php288.56 (USD6.56) generated in producing briquettes are higher when compared to the majority of waste reclaimers’ daily income of Php124.00 (USD2.82). The high positive response (93%) on the usability of briquettes and the willingness of the respondents (81%) to buy them when sold in the market indicates its promising potential as fuel in the nearby communities. Results of briquette production citing the case of UCLA could be considered as potential source of income given the social, technical, economic and environmental feasibility of the experiment. This method of utilizing wastes in an urban setting of a developing country with similar socio-economic and physical set-ups may also be recommended for testing or replication.

Except where otherwise noted, this item's license is described as Attribution 3.0 Philippines
Links
BAHÁNDÌAN Repository GuideDisclaimerFAQsSubmit your workNews and Updates