Politics in Iloilo City: A study of Ilonggo perceptions on political patronage and dynastic politics in the post-EDSA period, 1986-2006 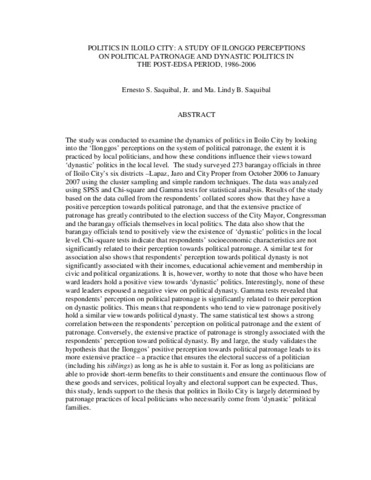 The study was conducted to examine the dynamics of politics in Iloilo City by looking into the ‘Ilonggos’ perceptions on the system of political patronage, the extent it is practiced by local politicians, and how these conditions influence their views toward ‘dynastic’ politics in the local level. The study surveyed 273 barangay officials in three of Iloilo City’s six districts –Lapaz, Jaro and City Proper from October 2006 to January 2007 using the cluster sampling and simple random techniques. The data was analyzed using SPSS and Chi-square and Gamma tests for statistical analysis. Results of the study based on the data culled from the respondents’ collated scores show that they have a positive perception towards political patronage, and that the extensive practice of patronage has greatly contributed to the election success of the City Mayor, Congressman and the barangay officials themselves in local politics. The data also show that the barangay officials tend to positively view the existence of ‘dynastic’ politics in the local level. Chi-square tests indicate that respondents’ socioeconomic characteristics are not significantly related to their perception towards political patronage. A similar test for association also shows that respondents’ perception towards political dynasty is not significantly associated with their incomes, educational achievement and membership in civic and political organizations. It is, however, worthy to note that those who have been ward leaders hold a positive view towards ‘dynastic’ politics. Interestingly, none of these ward leaders espoused a negative view on political dynasty. Gamma tests revealed that respondents’ perception on political patronage is significantly related to their perception on dynastic politics. This means that respondents who tend to view patronage positively hold a similar view towards political dynasty. The same statistical test shows a strong correlation between the respondents’ perception on political patronage and the extent of patronage. Conversely, the extensive practice of patronage is strongly associated with the respondents’ perception toward political dynasty. By and large, the study validates the hypothesis that the Ilonggos’ positive perception towards political patronage leads to its more extensive practice – a practice that ensures the electoral success of a politician (including his siblings) as long as he is able to sustain it. For as long as politicians are able to provide short-term benefits to their constituents and ensure the continuous flow of these goods and services, political loyalty and electoral support can be expected. Thus, this study, lends support to the thesis that politics in Iloilo City is largely determined by patronage practices of local politicians who necessarily come from ‘dynastic’ political families.

Except where otherwise noted, this item's license is described as Attribution-NonCommercial-ShareAlike 3.0 Philippines