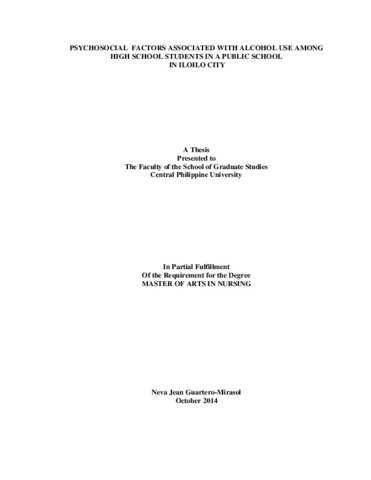 This study was conducted to determine the psychological factors associated with alcohol use among high school students in a public school in Iloilo City. More specifically, the study aimed to determine the demographic characteristics of the high school students such as age, sex and year level; the psychological characteristics of the students in terms of personality traits and peer pressure; the social characteristics of the students in terms of history of alcohol use in the family and mass media exposure to alcohol advertisement; the alcohol use among high school students in terms of type of alcoholic beverages, frequency and amount of alcohol intake; the relationship between demographic characteristics and alcohol use; the relationship between psychological factors and alcohol use; and the relationship between social factors and alcohol use. This is a descriptive-relational study that employed a one- shot survey design. Stratified random sampling was used in the selection of the study respondents. The following findings were revealed by the study: Most of the respondents were males who were 15-17 years old. The mean age was 14.82. Most of the respondents had understanding personality traits. Majority of the respondents had friends who were alcohol drinkers. Majority of them had family members who were alcohol drinkers, with parents as the most in number. Almost three-fourths of the respondents watch alcohol advertisement on television. Majority of them spend at least one hour in a week in listening in radio programs, reading billboards or posters, newspaper and magazines, surfing internet and watching television with alcohol advertisement. Majority of the respondents were alcohol drinkers and started drinking at age 12 to 13 and had been drinking just for less than a year. The respondents said that they prefer to take a combination of drinks such as juices, gin and whisky occasionally consuming 1-2 bottles of beer or 1-2 shots of hard drinks in a drinking session together with their friends thus to do this just for curiosity and for fun. Among the demographic characteristics sex was the only found to be related to alcohol use, age and year level are not. Among the psychological factors peer pressure as found to have a significant bearing on alcohol use. While the social factors found to be related to alcohol use was drinking parents and siblings. Mass media exposure was not significantly related to alcohol use. Different conclusions were drawn from the results of this study. Students have understanding personality traits. Generally, respondents are pressured by peers to drink alcoholic beverages. They can also be easily influenced by their peers in doing something and in decision making. Almost all of the respondents grew up with parents, siblings and relatives who were alcohol drinkers. This means that exposure to alcoholic drinker, can make prone to drinking and thus they may suffer different disturbances in daily living and increasing parenting problem. The student’s exposure to alcohol advertisement is low yet they started drinking alcoholic beverages at a very young age. The male students are more likely to drink alcoholic beverage than girls. Among the psychological factors only peer pressure is significantly related to alcohol use, while among the factors, alcohol use of parents and siblings is significantly related to alcohol use of the adolescents. This suggests that environment and social interaction, such as pressure from peers can influence teens to drink.