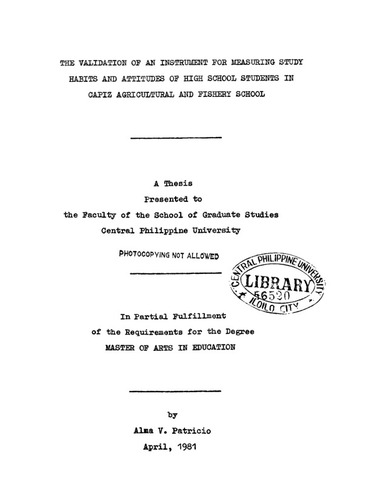 Nowadays, laymen and educators are much, concerned with a great number of students, who, because of their lack of systematic study habits and study attitudes cannot cope with school work and eventually drop out of school. It is not unusual to find a grade six pupil who can neither read or write short compositions correctly nor express his ideas in correct English. Sometimes, he cannot profit from the printed page because of deficient vocabulary and poor reading ability. Teachers often complain of the poor scholastic achievements of their pupils, despite their efforts to impart the lessons to them. Parents too are puzzled why their children in the elementary grades can hardly read and comprehend what they have read. A study conducted in 1974, the Survey of the Outcomes of Elementary Education (SOUTELE) revealed that sixth grades across the nation are deficient in skills which are basic to success to learning in the different areas commonly referred to as the three R's. According to the late Assemblyman, Dr. Waldo S. Perfecto, as reported by EDPITAF people in the Capiz Education Review, out of every one hundred pupils starting in grade one in the school year 1967-68, 1968-69, and 1969-70, only forty-one, forty-three, and forty-five respectively reached grade six. Studies of Esquerra, McCausland and Steward, and other authorities revealed that study habits and attitudes of students are positively related to their scholastic achievements and attitudes toward school subjects. Realizing the significance of the above statement, the investigator felt the need of an instrument that would measure study habits and attitudes of high school students. Very early she realized that such an instrument would be difficult to formulate and would require a long time to finalize. It was, therefore, decided to adapt the Survey of Study Habits and Attitudes (SSHA) by Brown and Holtzman and validate it to make sure it would correctly assess study habits and attitudes of Filipino high school students, those in Capiz Agricultural and Fishery School, in particular. Such instrument can be used later by teachers and administrators in surveying the above traits which are related to the students' scholastic achievements and drop-out rates of schools. The problem Statement of the Problem The study aimed to validate the Survey of Study Habits and Attitudes (SSHA) by Brown and Holtzman for measuring study habits and attitudes of high school students in Capiz Agricultural and Fishery School where the researcher is a guidance counselor. Since this instrument was standardized for the use of American college students, it may not be suited for Filipino high school students. So, the investigator deemed it necessary to validate the SSHA Inventory to make certain it would be appropriate for use with Filipino high school students. Questions that the study sought to answer: 1. Is the simplified form of the SSHA instrument appropriate for surveying the study habits and attitudes of Filipino high school students, particularly those in Capiz Agricultural and Fishery School? 2. Are the sentence structures identified in the instrument found in the course outlines used by the different high school English teachers and were taught by them from the first to the fourth year? 3. Are the words used in the instrument, as identified from Thorndike and Lorge's Word List, within the vocabulary which should be common in the grade level of the students? 4. Is the instrument suited to the abilities and backgrounds of the students under study? 5. Do the different items in the inventory correlate highly with the whole scale? 6. Is the instrument reliable enough for measuring the study habits and attitudes of high school students?

Master of Arts in Education major in Guidance and Counseling