Achievement and its relationship to self-concept and other factors 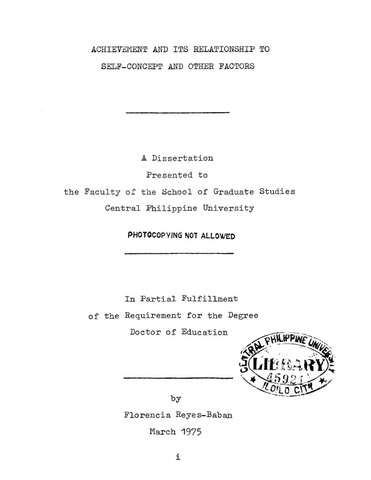 Concern for the prediction of academic performance has come to the spotlight with Presidential Decree No. 146 promulgated on March 9, 1973. First implemented on November 25 of the same year, more than 300 thousand fourth year high school students took the National. College Entrance Examination to comply with the decree. In essence, the decree requires all high school graduates, seeking admission to post-secondary degree programs necessitating a minimum of four years study to pass a national college entrance test. This examination is designed "to maintain the highest quality of education in the Philippines, regulating the admission of students from secondary institutions of learning to promote national development, and, ultimately, to help maintain a healthy and viable balance of all types of workers in the manpower stock in the country." There has been a long felt need to screen students entering college. In fact, from 1959 through 1962, a national examination was given each year by the Department of Education to all graduating high school students in the country, with this purpose in mind. Strong objections, however, specifically from the private school sector, stopped the giving of the examination. The test results were then used merely for evaluation, not for screening admissions to the university. The weaknesses of the country's educational system are succinctly analyzed in the observations made by Mr. Bony Diaz, Director General of the National Manpower and Youth Council, who said that there exists a great gap between available skilled jobs and skills needed to fill these jobs; that there are a lot of people holding jobs for which they are not qualified; and that there are really no shortages in general skills, but rather in specific skills. It seems incongruous that most of those concerned and, even worse, a high percentage of the millions of unemployed in the country are college graduates. In a developing country like the Philippines, human resources are the keys to progress. It therefore cannot afford high rates of failures who will wander out into less critical occupation's or unemployment only to render ineffective service or suffer from frustrations of failure. Passing the National College Entrance Examination, which includes ability and limited aptitude tests, will not automatically guarantee college entrance. Candidates who pass it and who fall within the quota approved by the Educational Department may still be required further examinations by individual institutions. One need of the university, therefore, seems to be more precise methods and instruments for the identification of students who will succeed in college. Early educational research focused primarily on ability factors as predictors of success. The NCEE still uses this concept. Recently, however, there have been important shifts in emphasis and in the conceptualization of, the problem due to the gradual recognition that some students perform better or worse than predicted by mere ability. Because of this observation, the search has led to the consideration of "personality" factors. Still most recently, the search has led to the recognition of interaction effects of personality with environment. Inasmuch as there always seem to be unexplained and unidentifiable factors that influence academic performance, research will no doubt keep on; and, unless precision is attained in the prediction of the academically-successful college student, the university will continue to open its doors to the incapable. This investigator—who is teacher, mother, and citizen of the New Society—in her deep concern for the development and progress of the country through its educational system to which she has devoted most of her life, has undertaken this study in the hope that she might suggest a few aspects for consideration by the university. The results of this study may be useful not only in the screening of those who hope to go to college but also in the understanding and guidance of those who are already there but are not achieving. I. The problem Statement of the Problem Research on factors related to academic achievement has led to the consideration of self-concept, otherwise also termed "self-appraisal," "self-esteem," "self-understanding," "self-image," or "ego-strength." Theorists of self-concept do not entirely agree on the fundamental nature of self-concept, but certainly do agree that there is no factor more decisive of the psychological motivations of man than the estimate he passes on himself—his self- concept. An individual's feelings, ideas, and attributes about himself, his self-concept, molds his life-style, his goals and values, and his motivations for achievement. The factors of socioeconomic status, intelligence, and sex have been found "consistently" predicting achievement although they may not be the most important predictors. As regards age, certain parents and teachers feel that students in the fourth year high school are too young because of the reduction of the formal elementary school term from seven to six years, and because of the acceptance of six-year-olds to grade one. In the light of the importance of achievement in school, it was felt that a study such as this, especially in a particular area like Iloilo City, was necessary either to confirm what has been found through previous researches or to present new insights into the problem of academic achievement in relation to these factors. The study aimed to determine the relationship of achievement to self-concept, socioeconomic status, intelligence, sex and age. Specific questions to which answers were sought are: I. Is achievement related to self-concept? II. Is achievement related to socioeconomic status? III. Is achievement related to intelligence? IV. Is achievement related to sex? V. Is achievement related to age? VI. Is achievement related to the interaction of self-concept, socioeconomic status, intelligence, and sex in varying combinations?