The letter of credit: An assessment of its use among members of the Philippine Exporters Confederation, Inc. Region VI-A 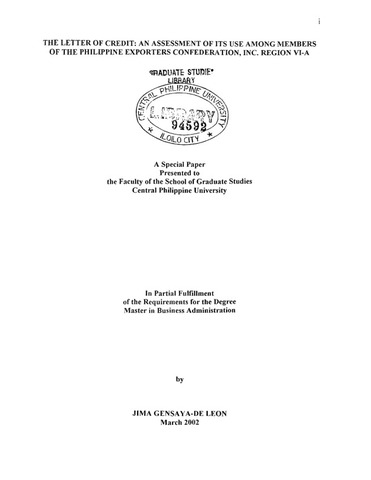 Background and Rationale Globalization makes the whole world a single market place. Science and technology has lessened the barriers among countries in the world and has facilitated the exchange and transfer of information and trade which spurs worldwide growth and development in the economy. The Philippine exporter is a major income earner of Philippines. For those based in Iloilo specifically, they have grouped themselves into an alliance who compose the Philippine Exporters Confederation, Inc. Region VI-A. Their products show to the world the ingenuity, the art, and the pride of the Ilonggo. Trading in a borderless world has given rise to interlinked economies in which our exporters play a very active role. Each country has its product to sell and the interchange of these products are essential to the improvement of each of the trading countries specifically and to the development of the worldwide economy as a whole. Where the market was relatively free for any one or any nation to trade with, there is used a common instrument which is accepted and regulated in International Law which is called the Letter of Credit. The Letter of Credit is an instrument governed by the International Chamber of Commerce (ICC) and the Articles are issued by the Uniforms Customs and Practice Code for Documentary Credits, 1993 Revision, ICC Publication No. 500 (UCP No. 500). The Letter of Credit is a letter addressed to the seller, written and signed by a bank acting on behalf of the buyer that the bank shall honor drafts on itself if the seller conforms to the specific conditions set forth in the Letter of Credit (L/C). The Letter of Credit offers the exporter the greatest degree of safety because it shall have the commitment of the bank to honor payment when the conditions pre-set are adhered with. The exporter is thus assured of payment for the goods he shall have manufactured and delivered as they have agreed with their buyer. Through the Letter of Credit, the bank substitutes its own commitment to pay for that of its customer - hence the assurance to the exporter. An article about China of Paul M. F. Cheng entitled “The Giant Awakes” reveal that China has been successful in opening itself in the outside world because of the financial L/C’s it has entered into with foreign firms. And China indeed, has awakened and is an emerging power in international trade. With the safest instrument available at hand to the exporter, it has been noted however, that our exporters have not fully utilized the usage of the Letter of Credit. The actual experience of the researcher with the trade and finance operations with a bank has revealed very minimal usage of L/C negotiations for the past five years. Because there have been no formal nor systematic investigations made to document this; it is perhaps time to assess the extent of usage of the Letter of Credit among the local group of exporters - hence this study. Objectives This study was conducted to determine the extent of usage of the Letter of Credit among members of the Philippine Exporters Confederation, Inc. Region VI-A for the five year period from 1997 to 2001. The specific objectives of the study are the following: 1. To determine the extent of usage of the Exporters in terms of the following: a) The number of times the Exporter has used the Letter of Credit from 1997-2001; b) The annual frequency of usage of each Exporter with the Letter of Credit; c) The volume of negotiations of the Exporter with the Letter of Credit. 2. To determine the extent of usage of the Letter of Credit according to the following: a) The type of industry b) The size of capital c) The length of experience as an exporter 3. To determine the problems encountered by the Exporters in the use of the Letter of Credit, and 4. To issue recommendations on how the problems herein revealed will be addressed.