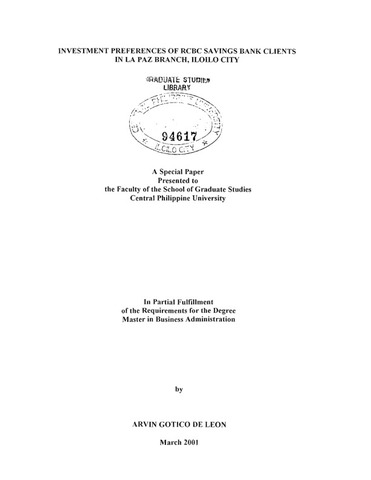 Background of the Study RCBC Savings Bank is a wholly-owned subsidiary of Rizal Commercial Banking Corporation and a member of the Yuchengco Group of Companies by Ambassador Alfonso Yuchengco, Sr. It has a total branch network of 110 branches nationwide, the second largest among thrift banks in the country, with two branches in Iloilo City located in Jalandoni, and La Paz. The bank’s clients come from all levels of society. Investment in banks are perceived by most as the best way to earn through high interest rates. But then, some are not fully aware of other services being offered. As the word “savings” as part of the bank’s name, they would say they can only open savings and checking account. This is a misconception. The bank offers almost the same products and services as that of commercial banks. People really hold on their money. Others would say that it is their “hard-earned” money. They make sure the money they invest would give them high returns. So they put it on time deposit and other term accounts. Since they are that so particular about their investments, they sometimes transfer them to other banks that has better offer in terms of location, customer service, interest rates, etc. - such is a strategy being played in the industry. The economy faced the devaluation of the Philippine currency, clients rushed to the bank for fear of losing their money doubting on the bank’s stability, thus, fear they might not recover their investments. Since then, they are now as keen as before. Some of them rather keep their money in their homes rather in banks. But still others think otherwise. Investment in RCBC Savings Bank favors them. Even now the economy is not as stable as before that the banking system is partly affected by the current political crisis, people don’t know how to invest their money in banks. They want to earn more, “but is it safe?” This is one the many questions being asked by some clients. Others tend to be confused which investment would yield them more. Investments are evaluated in relation to their expected return and risk. Risk is defined as the deviation of the actual return from that which was expected. There is a presence of risk for those who invest in long-term placements. When interest rates are expected to fall significantly, most would prefer investing in long-term maturities. Investments would be merely a means of balancing present against future consumption. Not knowing what lies ahead, investors are unable to plan lifetime consumption patterns with certainty. Because the returns from investment and the timing of those returns are uncertain, they compensate for the lack of certainty by requiring an expected return sufficiently high to offset it (Van Home, 1996). This study will answer the problems both the bank and the clients are encountering today. Statement of the Problem “What are the investment preferences of the RCBC Savings Bank clients in La Paz branch, Iloilo City?” The rationale behind this study is to know what are the clients' investment preferences in the bank’s product or service such as the Peso and Dollar Time Deposit, Prime Savings Account, and the Pamilyaman Savings Account. Objectives of the Study Generally, this study intends to know the investment preferences of the RCBC Savings Bank clients in Iloilo City. Specifically, this study intends to: 1. Classify the bank’s clients according to their age, income, educational attainment, and sex. 2. Determine the depositors’ investment preferences when they are grouped according to age, income, educational attainment, and sex and when they are taken as a whole. 3. Determine whether or not there is a significant difference in the investment preferences of the bank’s clients when they were taken as an entire group and when they were classified according to age, income, educational attainment, and sex and their investment practices.