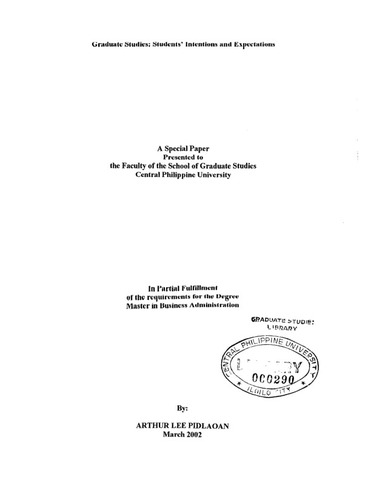 Background and Rationale of the Study According to statistics from the Department of Labor and Employment (DOLE), in the year 2002, 8 million Filipinos were either without jobs or underemployed. Having an education is of a high priority to many Filipinos because it is a main ingredient in the formula needed to obtain one’s desired job. Filipinos have a deep regard for education, which is viewed as a primary avenue for upward social and economic mobility. Since the onset of United States colonial rule, with an emphasis on mass public education, Filipinos internalized the American ideal of a democratic society in which individuals could get ahead through the attainment of a good education. Lack of a formal education cannot be the only culprit, which hinders people from finding a job because the majority of Filipinos have attended some school. The Philippine government considers everyone who has completed four years of elementary school as literate. The literacy in 1970 of 82.6 percent went up to 88 percent in 1988. This shows the percentage of Filipinos finishing elementary school has improved despite the ever-increasing population. The general consensus of the country do acknowledges the importance of individuals to be educated and to learn. But simply going to school and graduating doesn’t necessarily mean the student obtained the expected information from their education. Schools have promoted students regardless of achievement. These concerns increased as Philippine education institutions in the late 1980’s began to vary more in quality. Some universities were excellent, while others were considered “diploma mills”. Institutions of learning are intended to impart knowledge to students of their respective schools. Thus, one would think the reason students go to school is to learn. But schools with inferior quality of education continue to have high levels of enrollment. Students continue to graduate without having a full grasp of knowledge of the basic information that they were supposed have learned. Large numbers of individuals still have difficulty finding a job. Lack of available jobs is one reason of high unemployment. But how much of this is contributed to the fact that these individual do not have knowledge and or skills needed? Colleges and Universities are institutions of higher education that offer programs beyond the high school level. These institutions provide the necessary training for individuals wanting to enter specialized professions. Admission in a master’s program requires students to have graduated from a with baccalaureate degree. It would be interesting to find out why students pursue further education beyond college. Many college degree holders are unemployed. While others college graduates are gainfully employed but have decided to continue their studies. What are there reasons or intentions for doing so? It is expected that this study will answer what the graduate students intentions of taking a postgraduate course and what they expect once they complete their master’s degree. Objectives of the Study This study aims to determine the intentions of graduate students in pursuing a graduate education, and what they expect from it. Furthermore, the study also aims to find out if the students’ intentions and expectations are associated with selected personal and work related factors. This study specifically aims to: 1. determine the profile of graduate students in terms of age, sex marital status, work status, undergraduate degree, and course being pursued. 2. determine the reason why graduate students chose to enroll at Central Philippine University among all the schools in the city offering postgraduate studies. 3. determine what the students’ intentions were when they enrolled in the graduate school and whether intention is associated with age, sex, marital status, work status, undergraduate degree and degree being pursued. 4. determine what the students’ expectations were when they enrolled in the graduate school and whether expectation is associated with age, sex, marital status, work status, undergraduate degree, and degree being pursued. 5. determine if the graduate students presume they will complete their course and how long it will take.