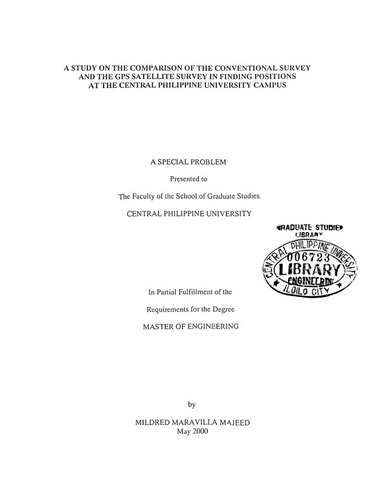 This study was conducted to make a comparison of the conventional survey using the theodolite and measuring tape with that using the present state-of-the art equipment, the Global Positioning System (GPS) navigator/receiver. The comparison is made as to the procedure or steps involved in the survey, the cost of conducting the survey, and the accuracy of the data obtained. Both surveys were conducted on the same site, at the campus of Central Philippine University in Jaro, Iloilo City. The instruments and equipment used in the conventional survey were the theodolite, measuring tape, marking pins and stadia rod. The GPS navigator/receiver, on the other hand, was the only instrument used in the GPS satellite survey. The data taken during the conventional survey were the azimuths of each imaginary line joining two successive stat-ions in the close traverse as well as the distance separating such points. From these values, the latitude and longitude of each station were computed using basic principles of Trigonometry and Surveying. The latitude and longitude values pinpoint the position/location of a point anywhere in the world. For the GPS satellite survey, the data taken were directly the latitude and longitude of each point or station. The distance between two stations was computed based on the principles of Pythagoras (Pythagorean Theorem) as related to the constant value of the radius of the earth. The computations for the costs of the survey were based on the cost of the instrument used, the duration of conducting the survey, and the number of personnel constituting the survey team. This study showed that much time is saved when GPS satellite survey is used. Post survey computations are very minimal in the said survey while the conventional method involves “balancing the survey” most of the time. However, since the GPS navigator used in this survey was of Standard Precision System (SPS) only the value of the horizontal distance is expected to be less accurate. The cost of conducting the GPS satellite survey is lesser than conducting the conventional survey due to the lesser cost of the instrument, fewer number of persons involved and the shorter length of time in conducting the survey.