Stress and self-concept among college deans in Iloilo: Their relationship to management style 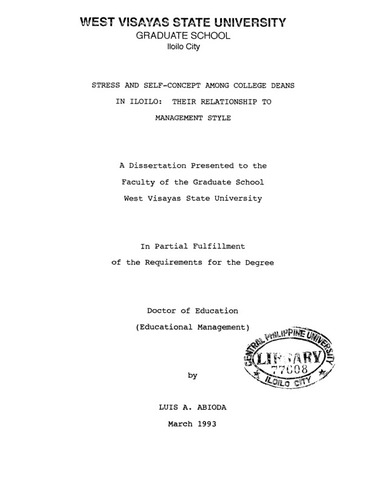 How stress and self-concept among the college deans in Iloilo might be associated with their management styles needs to be ascertained. The present study investigated this possible association. Furthermore, the study investigated how certain personal and environmental factors might influence the dean's stress, self-concept, and management style. The study was conducted in October, 1992. Respondents of the study were the 51 deans randomly selected from a total population of 60. Data needed for the investigation were gathered through the use of three American-made instruments: Management Style Test (Rowe et al., 1988), Stress Test (Schnert, 1981), and Self-Concept Test (Everly, 1979). The instruments were trial administered among 12 secondary school principals to ascertain their administrability in Philippine setting. Computerized SPSS factorial analysis results revealed the construct and content validity of the instruments for use in the Philippines. This descriptive study utilized the raw scores, means, assigned scales, and standard deviations as the descriptive statistical tools; and the t-test, Analysis of Variance, and Pearson r set at .05 significance level for two-tailed tests, as inferential statistics. The deans were found to be generally not stressed; they manifested strong self-concept, and reflected analytical management style. The following groups reflected conceptual management style: younger deans, deans with doctoral and with baccalaureate degrees, deans with long administrative experience, deans managing small student populations, and deans with few dependents. The younger deans showed a significantly higher stress level than the older ones. Those with baccalaureate degrees showed significantly higher stress levels than those with higher degrees. No significant differences in the degree of self- concept were noted among the deans under any category. As to management style, a significant difference was noted only between the deans with few dependents and those with many dependents. Level of stress was significantly and negatively related to the degree of self-concept among the deans whether taken as an entire group or classified according to certain categories. Generally, stress level and management style significantly and negatively correlated. Finally, self-concept and management style significantly and positively correlated among certain dean groups.