Perceived stressors, coping mechanisms and degree of burnout among faculty in a private institution in Iloilo City 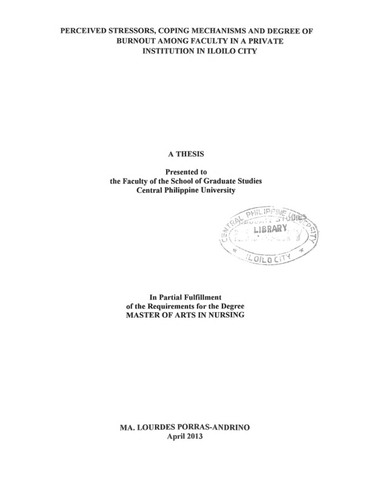 A descriptive-relational study on Perceived Stressors, Coping Mechanisms and Degree of Burnout among Faculty in a Private Institution in Iloilo City was conducted employing a one shot survey design. Data were collected using a self-administered questionnaire modelled from Lazarus and Folk man and from Maslach Burnout Inventory-ES. The respondents were full time faculty of Central Philippine University. The statistical tool used to analyze the descriptive data were, frequency distribution and percentages, mean, SD, t-test and ANOVA were used to examine variation, while Gamma was used to determine relationship. The level of significance for the test of hypothesis was set at 0.05. The result of the study disclosed that slight majority of the respondents were aged 41 years and older, there were two times more female than male and almost three-fourths were master’s degree holder, nearly two-thirds had taught in the University for more or less ten years. Nearly two in every five of the respondents belonged to Arts and Humanities. Majority of the respondents had moderate perceived source of stress, the highest being administrative support. It was noted further that slight majority of the respondents perceived to a great extent the hassles of daily living, like the rising cost of almost everything, things of sort that affect the budget and impairs family resources. Majority of the respondents had fair coping mechanisms in terms of emotional support and cognitive support while good coping in terms of seeking social support and planning and hoping. The study results revealed that perceived stressors in terms of relationship with colleagues and superiors vary according to sex, while in terms of hassle it varies according to age. Coping mechanism in terms of seeking social support varied when classified according to educational attainment and length of service. Coping mechanisms in terms of planning and hoping varied when respondents were grouped according to sex and educational attainment. On the other hand, degree of burnout experience in the three subscales did vary when classified according to sex and age. A significant relationship were found between seeking social support coping with workload and hassles; emotional support with working condition; cognitive suppression with working condition; relationship with colleagues and hassle; Planning and hoping with hassle. Likewise, in degree of burnout in terms of emotional exhaustion significant relationship was noted on emotional exhaustion with administrative support, workload, hassles; Depersonalization with relationship with colleagues and hassles; emotional exhaustion with seeking social support and emotional support; personal accomplishment with planning and hoping; depersonalization with seeking social support.