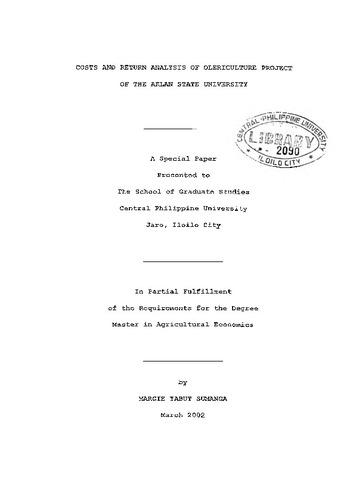 The income generating projects of the Aklan State University (ASU) has been operating for decade ago. Yet, its names were established quite lately along with the rising popularity of the college as a leading agricultural institution in the region and the only state university of agriculture in Western Visayas. As people stream to the university, a multitude of activities in some projects began. Aside from increasing reliance on hired labor on some projects, students fielded the manpower requirements in the various phases of production as part of their skills training. There are projects that grow progressively. However, other projects didn't show as much as its counterpart. Sustainability of operation continue to be the biggest obstacle which render them ineffective to carry out their tasks. According to Relingo as cited by Valencia (1996), project-in-charge do not appreciate poor performance, but they tend to ignore it for one reason that project objectives were focused solely for academic purposes. Moreover, the Office of the Project-in-charge was also under constant pressure. Academic demands along with the equally demanding project chores have resulted to frequent shuffling of project-in-charge as well as project to take care of which certainly affected performance. More importantly, the conversion of the state college into a university, brought change since the overall organizational structure including the administration and implementation of income-generating projects (IGPs). Today, IGPs are under the Office of the Auxiliary Services headed by a Director. In this regard, it is deemed necessary to assess the results of operation of the projects particularly the olericulture project. This will offer insights on the university management which will serve as basis for making future plans and actions. Likewise, it will provide information for the project-in-charge and his workers to take necessary measures to strengthen their weaknesses which impeded performance and provide an environment that will enhance for substantial growth. Objectives of the Study This study was conducted to assess the costs and returns of the olericulture project as one of the IGPs of the university. Specifically, the study focused on the following objectives: 1. To find out the total annual sales generated by the project. 2. To determine the total annual expenses incurred. 3. To compute the annual net income, and 4. To look into the marketing channel which influenced the performance of the project.