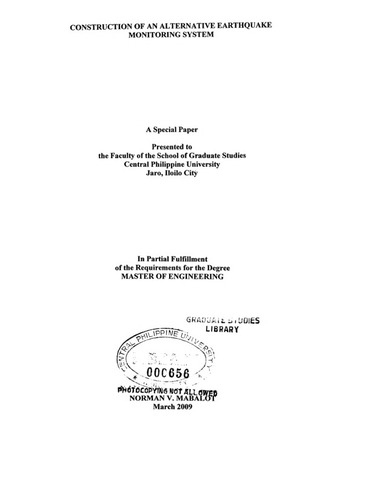 An earthquake is natural phenomena characterized by a strong sudden movement of the ground caused by stress in the tectonics plates. Geologists study these ground movements carefully using sophisticated equipment such as a seismograph. A seismograph is a device used to monitor and record ground activity. By monitoring and studying the ground movement at certain areas, seismologist can have a better understanding of the geological characteristic in that area, therefore they can provide explanation for a certain geologic event, and can also provide warning of a possible occurrence of an earthquake. Also, by increasing the number of earthquake monitoring stations using seismographs, geologist can have a more accurate and extensive network of indicators to be used in earthquake monitoring. The Philippine archipelago is located in a region most frequently affected by earthquakes. The government agency PHIVOLCS is tasked to monitor and mitigate the adverse effect of these phenomena. Unfortunately, PHIVOLCS have limited resources for acquiring and maintaining an extensive network of monitoring stations. A solution to this problem is being presented in this study which is to develop and construct an alternative earthquake monitoring system that can be used to augment the existing monitoring network operated by PHIVOLCS. The needed resources and the actual construction process will be described in this study as well as an actual demonstration of how this system operates. By utilizing this alternative system, private, public and government institutions can help PHIVOLCS in monitoring seismic events, thus resulting to an improved system for mitigating the adverse effects of earthquakes.