Lived experiences of children in conflict with the law in Dalayunan: a Home for Boys with violations of Republic Act 9165 Known as the Comprehensive Dangerous Drugs Act of 2002 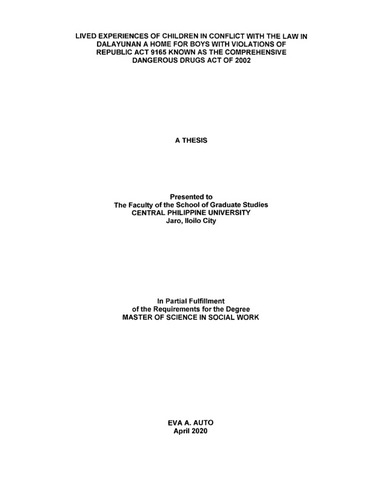 This study is about the lived Experiences of CICLs in Dalayunan. The study was guided by the following objectives; to explore the lived experiences of the children in conflict with the law in Dalayunan, Iloilo City with Violation of Republic Act 9165 known as the Comprehensive Dangerous Drugs Act of 2002. This study also would like to determine the meaning of the lived experiences of the CICL in the said Center of the alleged violation. This is a qualitative research that uses phenomenological approach to investigate the lived experiences. Through in-depth interview, the participants feelings and perceptions of the phenomenon were elicited. The study findings revealed that the respondents described their lived experiences of living in Dalayunan, a Home for Boys and its meaning under eight (8) major themes with corresponding sub themes. These are as follows: 1) Adaptability on Structured Rules and Regulations with subthemes which included Center scheduled activities, assigned tasks, quarrel with co-residents, disrespect, misunderstanding and violating rules and regulations;2) Values inculcation which involved the value of respect, kindness, friendship, and pakikisama; 3) Healthy Life Style which included eating and sleeping regularly, staying away from vices and listening to music; 4) Enhanced Talents and Skills with subthemes on skills to earn income, learn about music, provision of learning tools; 5) Change in Life Perspective with subthemes on change in behavior, discipline, and self-realization; 6) Guidance and Support from Staff, provision of basic needs and staff as parents; 7) Spiritual Growth, prayer and bible reading; and, 8) Emotional Struggle, isolation and separation from loved ones. Using the above findings, it is implied that the respondents living experiences have both positive and negative meanings in the lives of the children. It made them realize the essence of their families while living in the Center.

Auto, E. A. (2020). Lived experiences of children in conflict with the law in Dalayunan: a Home for Boys with violations of Republic Act 9165 Known as the Comprehensive Dangerous Drugs Act of 2002 (Unpublished Master’s thesis). Central Philippine University, Jaro, Iloilo City.