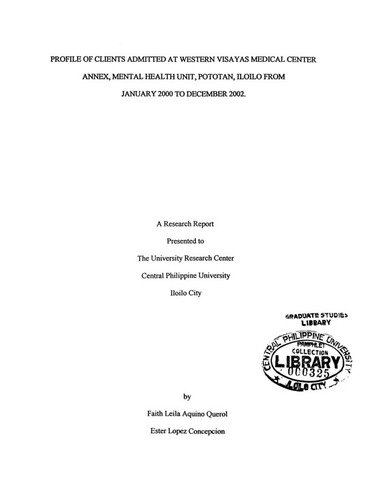 The study was designed to determine the profile of clients in Western Visayas Medical Center Annex, MHU Pototan, Iloilo from January to December 2003. The subjects of the study were the 1094 clients who were admitted from January 2000 to December 2003 in this hospital. The data were collected from the clients’ admission. Findings showed that more than three-fifths of the clients are residents of Iloilo. More than two-thirds belong to the early adulthood (20-39 years old) when admitted. Among the 1,094 clients three out of four were males. Most of the admitted clients were single. Nine out of ten were Roman Catholics, and a higher percentage of admitted clients are in high school. Eighty five percent of clients were not working prior to hospitalization. It could be assumed that mental illness affects all aspects of individual’s life. In the household data, one out of three of the respondents have 4-6 children and thirty three percent have 7-9 children. Only one third have 1-2 and 3 -4 family order or rank in the family. Findings on the admission data are as follows: Nine out of en were admitted for the first time. A third were admitted 10 days and below. The mean number of days of hospitalization is 21 -22 days. The policy is for acute clients to stay for 14 days preferably and have follow up in the OPD.