A study of Filipino adolescents' reactions to their readings 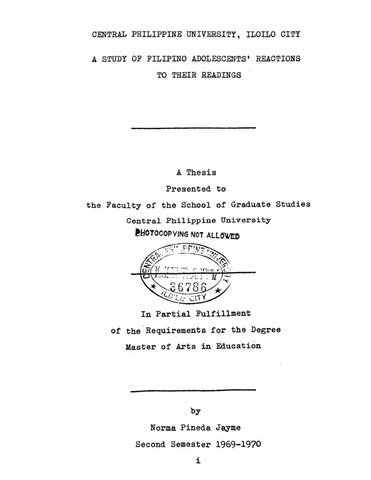 This study is concerned with the fourth level of reading. It was the purpose of this study to find the influence of reading on the concepts, attitudes, and behavior of Filipino adolescents. A modified critical-incident technique was used as the basis for collecting the data. The aim of the technique was to obtain self-observation of internal behavior of students. Students were asked specifically how books, stories, poems, and articles had affected their attitudes, ideas and behavior. The major instrument used was the questionnaire, and the information gathered was supplemented and validated by interviews and further validated by case studies. The subjects were 396 junior and senior students in both public and private schools in the city of Iloilo. In this study, three schools were chosen; namely, a private Roman Catholic school, a private Protestant school, and a public secondary school. The data gathered from the questionnaires were transmuted to percentages to make values parallel and hence meaningful. Types of literature considered influential, the types of influence, the general types of readings, and the situation in which reading was done were each correlated with sex and age, respectively. The chi-square and the significance of the difference between two percentages were used in determining the degree of relatedness between any two of the factors cited above. A random sampling of thirty students from the original 396 were interviewed. Students whose interview responses showed extreme patterns of high and low influence were selected for case studies. There were twelve students selected for case studies: six from the high influence group and six from the low influence group according to the criteria set up by the investigator. Other kinds of information to round out the case studies were taken from the guidance counselor’s records, teachers’ ratings and records, and cumulative records. The findings from the questionnaire, interviews and case studies revealed the following: 1. That adolescents in general were most influenced by short stories. 2. That the event of the story, the personality of the characters and the usefulness of the ideas in personal life were the parts of the stories that influenced the students the most. 3. That there were changes in concepts, attitudes and behavior of the adolescents as a result of their readings. 4. That the adolescents as readers tend to be observers, participators, and synthesizers in that order. 5. That the adolescents were most influenced in the following areas: philosophy of life and self-image. 6. That these adolescents were influenced more by voluntary reading than specifically assigned reading. 7. That the adolescents were influenced more by works of imagination than works of fact. 8. That adolescents were highly influenced by their readings, but such influence was not related to sex. 9. That adolescents were influenced more on the positive side than on the negative side. On the basis of the findings, the following recommendations were offered: 1. Teachers put more emphasis on the use of the reading program for the development of character values. 2. Introspective reports might be used by teachers to ascertain the kind of reading materials that influence their students. 3. Teachers and librarians inform their students that there are other materials in the libraries that are as interesting as novels and short stories. In addition, the study has pointed the need for further investigation such as: 1. The case study method be used for the study of individual patterns of response. 2. The relationship between reading and other variables, such as socio-economic class and other personality characteristics, if any, be studied. 3. Negative influence from reading might be further investigated. 4. The relationship of sex to situation in which reading was done be further studied especially in schools where the males are segregated from the females. 5. The relationship between reading and intelligence and reading comprehension be studied.