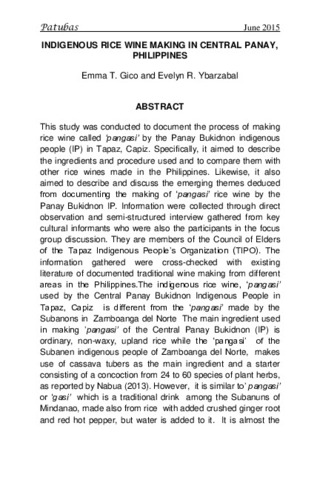 This study was conducted to document the process of making rice wine called ‘pangasi’ by the Panay Bukidnon indigenous people (IP) in Tapaz, Capiz. Specifically, it aimed to describe the ingredients and procedure used and to compare them with other rice wines made in the Philippines. Likewise, it also aimed to describe and discuss the emerging themes deduced from documenting the making of ‘pangasi’ rice wine by the Panay Bukidnon IP. Information were collected through direct observation and semi-structured interview gathered from key cultural informants who were also the participants in the focus group discussion. They are members of the Council of Elders of the Tapaz Indigenous People’s Organization (TIPO). The information gathered were cross-checked with existing literature of documented traditional wine making from different areas in the Philippines. The indigenous rice wine, ‘pangasi’ used by the Central Panay Bukidnon Indigenous People in Tapaz, Capiz is different from the ‘pangasi’ made by the Subanons in Zamboanga del Norte The main ingredient used in making ’pangasi’ of the Central Panay Bukidnon (IP) is ordinary, non-waxy, upland rice while the ‘pangasi’ of the Subanen indigenous people of Zamboanga del Norte, makes use of cassava tubers as the main ingredient and a starter consisting of a concoction from 24 to 60 species of plant herbs, as reported by Nabua (2013). However, it is similar to’ pangasi’ or ‘gasi’ which is a traditional drink among the Subanuns of Mindanao, made also from rice with added crushed ginger root and red hot pepper, but water is added to it. It is almost the same as ‘pangasi’ made from rice in North Western Mindanao, specifically in Bukidnon, in a study cited by Sanchez (2008) from Sakai and Caldo (1985b). However, they reportedly used sugar solution which is added for the second stage of fermentation instead of sugar cane juice, which is used by the Central Panay Bukidnon IP in Tapaz, Capiz. The use of leaves in the processing of ‘pangasi’ which included, ‘adgaw’, ‘talus’, and young coconut leaves have not been mentioned in earlier related studies. However, regarding their local knowledge on cleanliness and sanitation, it is believed that these leaves are naturally clean, especially if they are ‘ugbus’ or young, and have not been too exposed yet in the environment. Indigenous women have an important role to play in using and preserving this valuable local knowledge. They just have to be better recognized and supported by the community. The value of ‘pangasi’ is much more than just a traditional drink one can hold in his hand, rather it is one that holds the indigenous community altogether. Aptly described by Fox (1984) as having this social and ritual value, the use of rice wine may be seen as a powerful integrating force which links and binds the individual to the group (Fox, 1984). The local knowledge of the Panay Bukidnon (IP) in making ‘pangasi’ is comparable to the other local knowledge of other indigenous cultures in the Philippines. They just need to have it standardized so that their practice will no longer be always as per ‘estimate’ basis but would be quantifiable or in terms of measured quantities so as to yield a consistent, quality product.