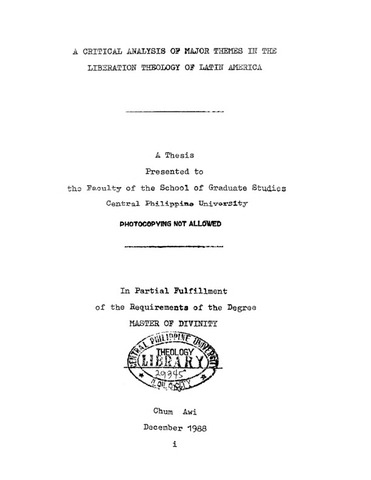 This thesis is an analysis and evaluation of the contents of several major themes of Liberation Theology. Furthermore, it is a response to the criticisms which arise against Liberation Theology. Four major themes, namely, "Man is the master of his own destiny," "Faith without ideologies is dead," "Hermeneutics of suspicion," and “The Church: A new breed of Christians," were chosen because they are heatedly discussed in Christian circles all over the world. The aim of this study is also to make clear the main points or thoughts of Liberation Theology so that people may understand the contents and aims of Liberation Theology. This may clarify unnecessary misunderstanding and confusion. To enable one to understand why Liberation Theology evolved, its background history and development are traced in chapter one. The basic situation of poverty in Latin America, which is seen as a "sinful situation," is the reason for the formulation of this theology. Certain conferences, councils, encyclicals and significant personalities are mentioned which begin to bring out this theological concept. The aim of the study of the first major theme is to answer the question, "Is man the master of his own destiny?" The importance of commitment to "praxis" is discussed as well as the significance of human limits and conquests in history. The problem of "What is truth?" is addressed and the untrust worthiness of man and his ability is critically studied. As a result of the study, which is based on Biblical concepts, theological understanding and historical facts, it is concluded that God alone is the master of man’s destiny. The study of the second major theme is centered on the relationship between Christian faith and secular ideologies. The successes and/cr failures of these secular ideologies such as, "Development," "Communism," and "Capitalism" are pointed out. Moreover, the concepts and objectives of "ideology" are traced. On the other hand, the importance of the Christian faith is also emphasized. Since the omnipotence, omniscience, and omnipresence of God are believed, the Christian faith is above every human institution, ideology, and activity. On the other hand, secular ideologies are necessary for the temporal needs of man. Because of this fact, the study concludes that faith must be supplemented by ideologies. The third major theme is "Hermeneutics of suspicion." Because of the historical changes in the situation of the poor majority of Latin America, the traditional teaching of the Church is suspected. To meet the purpose of liberation there is a new Biblical interpretation which emphasizes God as Liberator: Exodus; God's demands "Doing Justice"; Jesus and and Liberations the Kingdom of God; and Jesus and Conflict: the political dimension. In order to endorse the above hermeneutical approach, the rootedness of all theologies, including Liberation Theology, is pointed out. Because of its historical development, the study concludes in favour of the legitimacy of the new hermeneutical approach. The fourth and last major theme is concerned with the Church as a new breed of Christians. The structure and role of the Church has not been satisfactory to meet the demands of the time. To meet these, the Church has to take sides with the poor and oppressed because of the stark realities of the world. To help liberate these people the Church also must choose or create a political and economic system, and implement it, for their betterment. The members of the Church have to play their role as helpers of the broken and the bruised. By doing this, justice might be established. This is the way the new breed of Christians must act and live, with humility before God. On the whole, this study leads to the conclusion that Liberation Theology is not only an important subject of the time but also a necessary subject-matter of the world. It is pointed out that Liberation Theology needs improvement. By correcting and adding, it can be widened. Liberation Theology must not be biased only towards the poor and the oppressed. It has to liberate the rich and the oppressor as well. A true Liberation Theology has to deal with the liberation of everybody. Only theology which aims to liberate both parties can be a true theology.