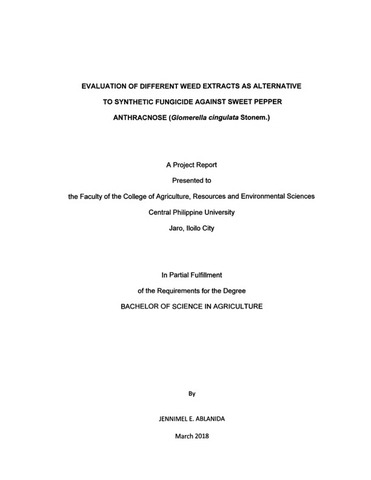 The study was conducted at the Central Philippine University College of Medical Science Laboratory, Jaro, Iloilo City from January 16 to February 1, 2018. The study aimed to evaluate the efficacy of different weed extracts as alternative to synthetic fungicide against sweet pepper anthracnose (Glomerella cingulata Stonem.). The study used fresh aqueous and dried ethanolic extracts that were performed separately and each was composed of six experimental treatments. The experimental treatments were laid out in a completely randomized design (CRD) with three replications. The results showed highly significant differences in the zone of inhibition between the plant extracts and the fungicide. In fresh aqueous extracts, all plant extracts showed no zone of inhibition while synthetic fungicide has the highest record of 34.22mm inhibition. Dried ethanolic extract shows that out of 4 plant extracts tested, only Boerhaavia diffusa showed antifungal activity with 14.66 mm zone of inhibition. The remaining plant extracts and water, which served as negative control, produced no zones of inhibition. On the other hand, synthetic fungicide, which was used as a standard chemical check, demonstrated by far the highest inhibition zone of 30.22 mm diameter.