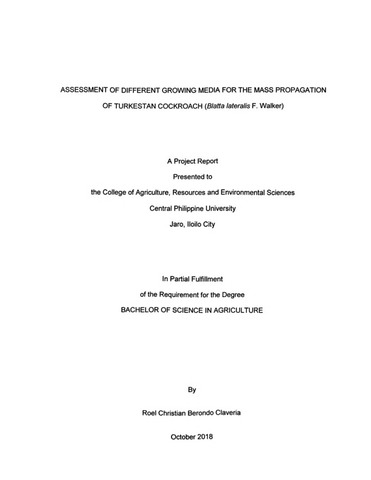 The study was conducted at LEB 105, CARES Building, Central Philippine University, Jaro, Iloilo City from July 23, 2017 to September 16, 2017. The experimental treatments were consisted of four different growing media such as pure cocopeat, wood shavings, mixture of garden soil and sand, and no medium that served as the control. These were laid out in a completely randomized design (CRD) with four replications. The study was conducted to assess the different growing media on the growth and reproduction of Turkestan cockroach. Specifically, this study aimed to determine the body length gain, growth percentage, survival percentage and hatching percentage of the Turkestan cockroaches cultured in different growing media. Results of the study revealed that the four growing media had no significant influence on the body length gain and survival percentage. In growth percentage, the data showed that Turkestan cockroach grown in wood shavings had significantly the highest growth. In addition, cockroaches in the control treatment, sand and soil and cocopeat media had significantly gave the highest hatching percentage. From these results, it can be concluded that B. lateralis can be mass propagated even without medium.