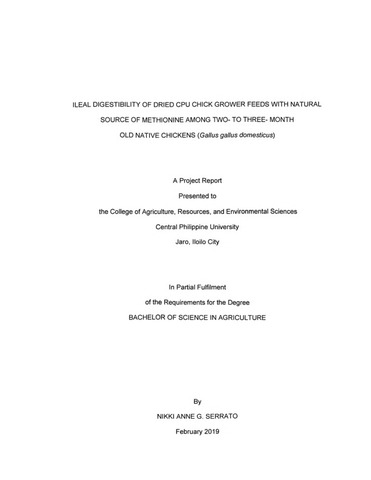 Amino acid digestibility is a sensitive indicator of amino acid availability in dietary ingredients for poultry. This study was conducted on November 23, 2017 to March 27, 2018 at CPU- CARES Research Building to determine the ileal digestibility of dried CPU chick grower feeds enhanced with natural source of methionine. The CPU chick grower feeds with semi-synthetic diet was mixed at 50% inclusion level. Prior to the assay, forty 2- to 3- month old native chickens were acclimatized for one week. The birds were then fed with the experimental diet for 1 hour and feed intake was recorded. The intestines were opened and the digesta in the lumen was flushed with distilled water and filtered. Samples were sent to the University of the Philippines, College of Fisheries and Ocean Sciences, Institute of Aquaculture Analytical Service Laboratory for amino acid analysis. Results of the analysis showed that histidine, phenylalanine and lysine have negative apparent ileal amino acid digestibility which resulted in surplus amount of standardized ileal digestibility in the diet due to higher ileal endogenous amino acid flow. The remaining amino acids including methionine have zero percentage of digestibility. Therefore, the formulated non- fermented feed is not an ideal diet for chickens since it was lacking in both essential and non- essential amino acids.