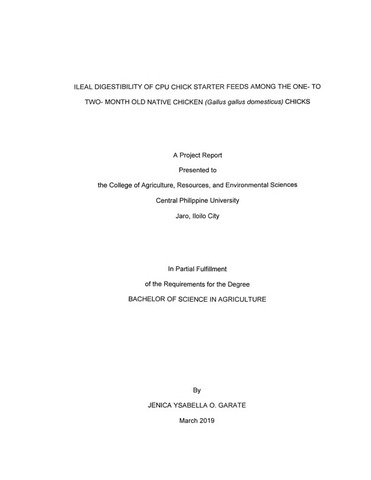 Feeds represent the greatest expenditure associated with poultry production. Methionine is one of the most limiting amino acid (AA) in poultry diet and is required for proper nutrient accretion to enhance performance, growth and development potentials of poultry. This study was conducted to identify and quantify the AA profile of fermented and non-fermented feeds and to determine the coefficient of apparent and percentage of standardized ileal amino acid digestibility of such feeds among native chicken chicks. The treatments used were the fermented and non-fermented CPU chick starter feeds with 50% semi-synthetic diet at CPU- CARES Research Building last November 23, 2017 to March 8, 2018. The feed and digesta samples were sent and analysed for their AA profile contents at University of the Philippines Visayas, College of Fisheries and Ocean Sciences, Institute of Aquaculture Service Laboratory. Results of the study revealed that the AA in fermented feed was higher than those in the non-fermented at 0.01477% and 0.00224%, respectively. The fermented feed had the total of 0.00736% essential amino acids (EAA) and 0.00741% non-essential amino acids (NEAA). In contrast, the amino acid profile on non-fermented feed had a total EAA of 0.00164% and NEAA of 0.0006%. The results further showed that the methionine was higher in the fermented than in the non-fermented feed. The total SIAAD value for fermented was 4513.43% which is greater than that in the non-fermented feed which had only 525.38%.These indicate that the fermentation process greatly contributed to the increase of AA in the CPU chick starter feeds among the one- to two- month old native chicken chicks.