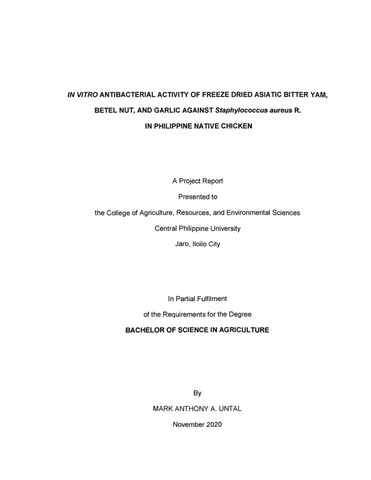 The study was conducted from November 11 to 13, 2020 at the CPU-CARES R & D Learning Center, Jaro, Iloilo City. The objective of the study was to evaluate the in vitro antibacterial activity of freeze dried asiatic bitter yam, betel nut, and garlic against S. aureus Rosenbach in Philippine native chicken. The experimental treatments were laid out in a completely randomized design with three replications. The treatments consisted of freeze dried asiatic bitter yam, betel nut, and garlic. Amtyl 500 antibiotic was used as the positive control and distilled water as the negative control. The potency of the freeze dried treatments was analyzed through zones of inhibition (ZOI) 24 hours after the application of the experimental treatments. Result of the study revealed that S. aureus applied with freeze dried treatments developed ZOI that are statistically wider than those in distilled water but narrower than that in Amtyl 500. On the other hand, based on the performance standards for antimicrobial susceptibility testing, S. aureus exhibited resistance to freeze dried asiatic bitter yam and distilled water. Freeze dried garlic and betel nut treatments showed susceptibility which is similar with the result interpretation on the Amtyl 500.