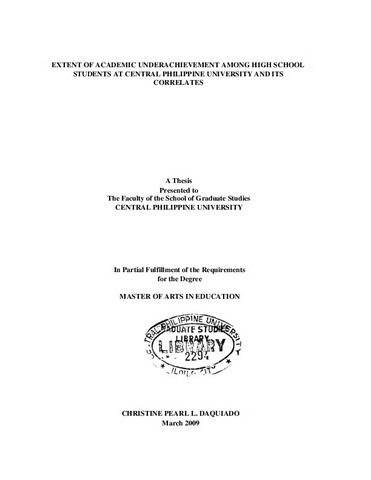 This is a descriptive-relational study that determined the extent of academic underachievement and its correlates among high school underachievers of Central Philippine University (CPU), Iloilo City during the school year 2008-2009. Of the 124 underachievers listed at the High School Guidance and Counseling Office of the University during the school year, 71 who were available served as the study respondents. Data were collected using self-administered standardized questionnaires for self-esteem and motivation, and a researcher-made instrument for the students’ personal characteristics. IQ, grades, and class schedules were taken from school records. The study was conducted with permission from the school administrators and high school principal. The Underachievers constitute 10 percent of the high school population of CPU High School at the time of the study. They were mostly male, below 14 years old, had college-educated and economically active parents and graduates of private elementary schools and members of clique groups. Most of them had less than 78 GPA, and A below average IQ, had High self-esteem, highly motivated and had moderately positive perception about their relationship with their teachers. Among the underachievers’ personal characteristics only year level and mother’s occupation were significantly associated with experience with peer pressure. Sex, father’s and mother’s education, father’s occupation and type of elementary school graduated from had no significant bearing on the students experience with peer pressure. Student’s unemployed mothers more likely experienced peer pressure than those with employed mothers. Underachievers with low IQ were also found to be more susceptible to peer pressure than those with higher IQ. Among the personal characteristics of the respondents, only father’s education and mother’s education were found to be significantly associated with perception. Underachievers with college-educated fathers and mothers had low to moderate perceptions on teacher-student relationship. Their perception on teacher student perception was not dependent on sex, year level, occupation of their father and mother, living arrangement, type and location of elementary graduated from. A significant correlation was found between self-esteem and motivation, between self-esteem and student perception of teacher student relationship. The higher the self-esteem of the underachiever, the more likely that he/she was motivated to get better grades. Moreover, the higher the self-esteem of an underachiever, the better the student perception of teacher-student relationship. The underachievers’ level of self-esteem however, has no significant influence on peer pressure, IQ and actual GPA, and their level of motivation was not significantly related to their perception of teacher-student relationship. No significant relationship was also found between self-esteem and peer pressure, IQ and actual GPA; between extent of motivation and peer pressure, IQ and actual GPA; between perception of teacher-student relationship and experience with peer pressure, IQ, and actual GPA, and between Peer pressure and IQ and actual GPA.