A study of the relationships of some factors to academic achievement 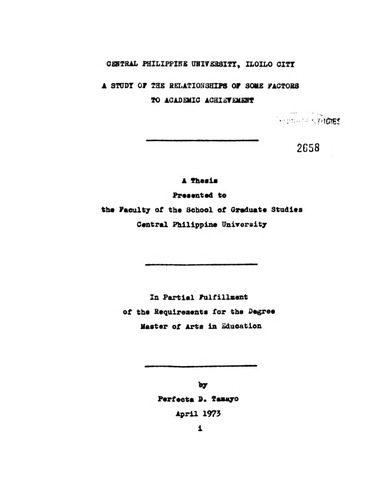 The study was designed to find out the relationships of different factors: intelligence, socio-economic status, study habits, and attitudes to academic achievement. Students randomly selected from the senior class of the Central Philippine University High School in 1970-1971 were used as samples. This consisted of sixty-three boys and sixty-four girls. The instruments used to obtain data were the Philippine Self-Administering Mental Ability Test, the Survey of Study Habits and Attitudes (by Holtzman and Brown) and a socio-economic questionnaire designed by the researcher. Achievement tests were constructed, pretested, and validated on five academic subjects namely: Composition, Literature, History, Trigonometry, and Physics. The statistical procedures used in the analysis of data were the following: 1. Computation of means and standard deviation, and of the significance of the difference of means. 2. Computation of coefficient of correlations, partial correlations, and multiple correlations, and the significance of the difference of correlations. 3. Computation of coefficient of determination. 4. Analysis of variance of variables on the relationship of intelligence to achievement. 5. Regression equation to determine overachievement and underachievement, in each ability group. The pertinent results of the study are: 1. The girls made higher scores in all the tests except in socio-economic status scale. The difference between means, in intelligence and in attitudes was significant in favor of the girls. 2. The boys were significantly higher in socioeconomic status than the girls. 3. The highest correlation was found between intelligence and achievement. The correlations were positive and high: .85 ± .25 for the boys, .81 ± .25 for the girls. 4. The correlation between socio-economic status and achievement was positive but low: .35 + .21 for the boys, and for the girls, .36 + .21. 5. The correlation between study habits and achievement for the girls was .34 + .21; that for the boys was .27 ± .24. The difference was not significant. The correlations for both groups were positive but low. 6. The coefficient of correlation between attitudes and achievement for the boys was .26 ± .24, an indication of slight relationship; for the girls it was substantial. .52 ± .18. 7. The coefficient of multiple correlations between the criterion and a combination of two or three variables was stable and significant. A very high B was obtained when the independent variable was the combination of intelligence, socio-economic status, and study habits; .87 for the boys and .85 for the girls. 8. Seventy-one per cent of the boys' achievement was due to the effect of intelligence and twenty-nine per cent were "unexplained" or error variances. 9. Seventy-three per cent of the girls' achievement were explained by intelligence and twenty-seven per cent were "unexplained" or error variances. 10. Seventeen per cent of the total group were overachievers. 11. Twenty per cent of the whole group were underachievers. 12. Overachievers, normal achievers, and underachievers were found in each ability group of the boys. 13. Overachievers, normal achievers, and underachievers were also found in each ability group for the girls.