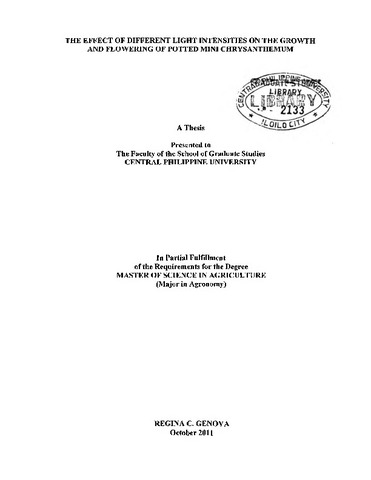 Chrysanthemum or Mums is one of the major cutflower cultivars produced in the Philippines. It is considered a short-day crop, that is, the plant sets flower buds and blooms only when nights are long and days are short unless lighting is regulated. The aim of the study was to determine the effect of different light intensities on the agronomic characteristics and flowering of chrysanthemum. The study was conducted from March 20 to May 2010 at Canaan Farm, Salngan Purog, Pototan, Iloilo. The treatments consisted of different light intensities such as 50W, 75 W, 100W, 150W and no light. Results of the study showed that supplemental lighting of different wattages on potted chrysanthemum did not significantly influence the height of the plants, number of branches per plant, average number of flower buds and full bloom flowers per plant. However the number of days from transplanting to bud formation and to full bloom flowers significantly p<0.01) varied among treatments. Those plants provided with additional lighting of 50,75, 100 and 150 watts were delayed in the blooming of their flowers by an average of 6, 15, 19 and 24 days over that of the control plants.