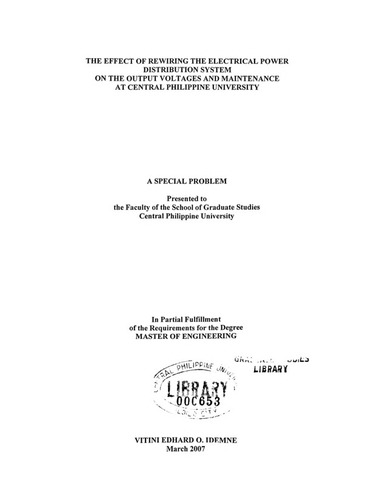 This study aimed to assess the effects of rewiring the Electrical Power Distribution System on output voltages and maintenance of electrical devices at CPU campus. Specifically it determined and compared the output voltages in the various buildings at CPU before and after the re-wiring done in January 2004 - March 2005. It also determined the maintenance problems experienced due to increasing demand for power and the overloaded system, and the strategies employed to address them. It determined the time gap between the occurrence of power failure and the switchover of supply from the CPU Power Plant, or resumption of PECO supply. The study compared also the present capability of the new power plant against CPU’s energy consumption through weekly and monthly load curves. In describing the distribution system before and after the rewiring the main difference between the previous and the present set-up are pointed out. The necessary information were collected through measurement of voltages before and after rewiring and conduct of Key Informant Interviews (KII). The findings revealed that seven (7) out of 24 major buildings in campus had average voltages below 220 volts before the rewiring while all the buildings had voltages of 220 - 231 volts thereafter. There were also frequent occurrences of damaged fluorescent lamps, burnt capacitors or windings of electric fans and motors, damaged air condition compressors and control circuits, damaged hard disks and data switches before the rewiring, while most of these troubles have not recurred or have been minimized after the rewiring. Consequently, the time spent by maintenance personnel in doing the same kind of job repeatedly has also been cut down and more job orders of other nature were attended to. Another significant finding was that the time gap between occurrences of power failure and the switchover of supply from the CPU Power Plant lasted from 30 minutes to at most eight hours before June 8, 2005 while beyond that date most of the change of power took about two to five (2-5) minutes only. Computation of power readings from the power plant showed the daily, weekly, and monthly load consumption of CPU. These indicated that there were instances in time when the power being consumed by the school was more than the generating capacity of the three generators on hand. The result of the study showed that the rewiring was an effective strategy in stabilizing the output voltages in the buildings throughout the campus. The stabilized output voltages minimized the damages to several kinds of equipment at CPU such as lights, fans, motors, computers and air conditions. Consequential to the change was the decrease in replacement of equipment/devices or its spare parts, as well as the reduction of man-hours spent repeatedly for the same kind of job. The new power plant with its present standby complement of three generator sets, being a component of the new distribution system, has also been able to reduce the time gap between the power interruption of the local utility and the supply of an emergency power, which seems almost adequate as of April 2007. . The average time gap of 2-5 minutes has enabled computer users (e.g. business office personnel, UCSC staff, faculty, students, etc.) to work uninterrupted because their uninterrupted power supply (UPS) could give them an extended working time of at least 15 minutes during brownouts, which is longer than the power interruption. Thus, it can be concluded that the rewiring of the electrical power distribution system at CPU was an effective strategy in stabilizing the output voltages on buildings throughout the campus, as well as helping minimize the troubles and costs in maintenance of electric equipment and devices. The new power plant with it three generating units which is a component of the new distribution system, has also been instrumental in reducing the time gap between the power interruption and the local utility company and the supply of emergency power which is almost adequate as of March 2007. However, should a PECO brownout occur during peak power demand, the load will be greater than the maximum output capacity (100%) of the generators. Moreover, it should also be noted that the recommended highest safe operating capacity of generators should only be 80% of its maximum capacity. Nonetheless considering all results as stated in the objectives, the rewiring of the electrical power distribution system at Central Philippine University was both needed and beneficial.