An assessment of the community extension services program of DC-SLMES Iloilo: A basis for the design of an integrated CES program 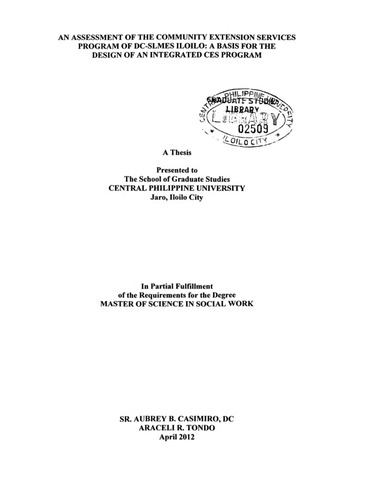 Academic institutions, whether in the Philippines or abroad continue to make a difference in the transformation of the lives of individuals, groups and communities through Community Extension Services (CES). Consistent with its vision and mission the DC-SLMES IIA has done its part to truly serve the poorest of the poor within the city and other nearby towns and province through the Community Extension Services since its inception in 1872. However, there has been no comprehensive evaluation made whether various programs and services continue to be relevant and responsive to the needs of the clients and adopted communities. More so, that such assessment is necessary in preparation for planning an integrated program as recommended both by accrediting association and the DC Provincial Inter-Ministry Team it conducted Management Review and Mission Audit in the Iloilo Integrated Administration. Hence, this study was conducted in the three schools of the DC-SLMES IIA, namely: Colegio de San Jose, Colegio del Sagrado Corazon de Jesus and St. Louise de Marillac School of Miag-ao. A combination of qualitative and quantitative design, this study used the Input-Process-Output-Outcome (IPO) model and Structure-Conduct-Performance (SCP) model as framework. The study focused mainly on the CES programs implemented by aforementioned schools to the clients and communities they serve with the clienteles, students, personnel and faculty as key respondents. There are five major programs being implemented, namely: Poverty & Hunger, Evangelization, Education, Social Concerns and Advocacies, and Special Projects. Each component has specific programs and services. The target population of this study consisted of 355 respondents, using stratified random sampling from the total population of 4,719 from the three schools. Accidental sampling was used in selecting the respondents. Structured interview, self-administered, in-depth interview, review of documents and participant observations were the tools for the data collection and analysis. Summary of Findings The general findings of this study proved that the CES of DC-SLMES IIA responded to the needs of the clients and community. It revealed also that the strengths of the three schools were more on the academic and religious programs while the weaknesses were on the socio-economic and political programs. Among the stakeholders, the personnel were the most active in involvement, as perceived by the stakeholders. Closely following were the students and clients while the community in general and the barangay officials were among the lowest in the ranking. Although the personnel got the highest rating, the majority of the stakeholders were students. Consistently, the Special Project, Evangelization Program and Education programs topped the list in terms of awareness and extent of realization of goals and objectives, as well as their responsiveness and relevance in meeting the needs of the client and the community. Similarly, Poverty and Hunger and Social Concerns and Advocacies got the lowest percentage in the aforementioned areas of study. The bulk of the Disaster Management Program was undertaken almost four years ago at the height of Typhoon Frank. Its impact continued to linger in the minds of the people. It was an incident wherein the stakeholders especially the students were involved in the relief operations and other support services. Most of the stakeholders expressed the need to continue the CES programs while some were convinced that the CES programs have fully met the needs of the clients and community. Others suggested additional services not included in the CES package. Most of these were associated with Poverty and Hunger and Social Concerns and Advocacies components. Conclusion The CES Programs responded to the needs of the clients and community as they considered the programs relevant to their needs. The CES programs have fully met the needs of the clients and community; however the stakeholders expressed to continue the existing programs with some improvements, expansion and sustainability. The other needs expressed by the stakeholders can be an additional component of the CES Programs as Emerging needs. This study revealed the sentiment and aspiration of the people in the community. While they have been appreciative of the traditional programs religiously implemented by the schools as shown on respective ratings, they aspired for more emphasis on those programs that respond to their needs.

Casimiro, A. B. & Tondo, A. R. (2012). An assessment of the community extension services program of DC-SLMES Iloilo: A basis for the design of an integrated CES program (Unpublished Master's thesis). Central Philippine University, Jaro, Iloilo City.