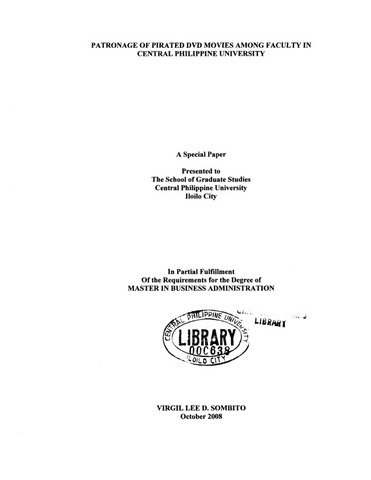 The study was conducted to determine the patronage of movie piracy among the teaching faculty of Central Philippine University. This attempted to do a single microeconomic analysis, particularly economic losses to the movie industry and the government. A one shot survey was utilized and a descriptive-analysis was employed. From the total of 343 faculty members, a sample of 181 respondents was obtained and proportionately allocated to the different departments/colleges. A self-administered questionnaire served as the main tool for data collection. The data was computer- processed using SPSS software version 14. Generally, most of the respondents were 35 to 45 years old, female. The majority were faculty members in the college of nursing. The mean age of the respondents was 43 years old. Majority of them had a monthly gross salary of P10,000 to P15,000, with the mean income of Pl9,100.50 per month. More than half (55.8 percent) of the respondents purchased DVD movies. Among those who did, the majority (44.6 percent) bought both original and not original DVD movies. Comparing the original and not original, 58.5 percent still bought not original DVD movies, despite knowing the piracy law. The majority (44.3 percent) purchased one to two DVD movies which contain a single movie every one to three months and would spend Pl00 to P250 for it. Data show that the respondents tended to purchase one to two original DVD movie discs containing a single movie. More than half (57.7 percent) of the respondents bought single pirated DVD movies every one to three months and would spend only an average of P70 and above for this, which is cheaper compared to the price of an original DVD disc. Moreover, the majority of the respondents (60 percent) bought pirated DVD movies with multiple movies more than those with less than five movies. Comparing original and pirated DVD movie discs with a single movie, data reveal that more than half of the consumers (57 percent) bought one to two DVD movie discs every one to three months. Over all, the consumer would buy three to four pirated DVD movie discs every four to six months. These findings support the fundamental theorem of demand that as prices rise, consumers will choose less costly alternatives. The data further reveal that the main reason why respondents (57 percent) purchase DVD movies which are not original is because they are affordable. The respondents were divided in their opinion regarding acceptability of buying discs which are not original. Majority of the respondents (51.4 percent) disagreed that it is acceptable to buy DVD movies that are not original while remaining percentage agreed. This depicts that the faculties response does not coincide since 58.5 percent still purchase pirated DVD movies. Among those find it acceptable, slightly more than half (58 percent) stated that it is affordable, while 14 percent mentioned that it is for user satisfaction and practical at the same time. The amount of money lost in the movie industry in relation to consumers buying of pirated movies is estimated at P7, 139.60 for each DVD disc containing more than five movies. The amount of money lost in government taxes in relation to consumers buying pirated movies is P49 for a single movie which is smaller compared to a DVD disc containing more than five movies (P96.11). There is an inversely proportional relationship between income and patronage. As the income decreases, the patronage for original DVD movies increases. On the other hand, as the income of the consumers increases, the lesser is the tendency to buy original DVD movies. Therefore, income does not have a significant effect to patronage. The table reveals that all of the variables show that income does not affect patronage on pirated DVD movies. However, the consumers’ preference affects their inclination to purchase regardless of their income. Conclusions 1. Compliance with the piracy law is low, since there are many who patronize pirated movies. 2. Consumers prefer to buy DVD’s with more movies than those with single movies. This indicates the consumer’s inclination to buy not only goods with lesser price, but in a quantity that they can benefit more from it. 3. Affordability of pirated DVDs is the main reason for the patronage among the faculty. 4. The respondents were divided in their opinion regarding the acceptability of patronizing pirated DVD movies. 5. The microeconomic analysis view of losses that was evaluated shows that the amount of money that was spent by consumers on pirated movies can create a significant impact to the movie industry. 6. The government is also losing a lot of money in their taxes when pirated DVD movies are patronized by consumers. 7. Income does not have a significant effect on patronage. The amount of income is not significantly correlated with the extent of patronage of pirated DVDs. Whether the consumer is earning less or more, they still buy pirated DVD movies. 8. Consumer satisfaction also plays a major role in their decision to buy DVD movies. Regardless of the price of the certain item, as long as the consumer feels that it brings them satisfaction they would spend on it.