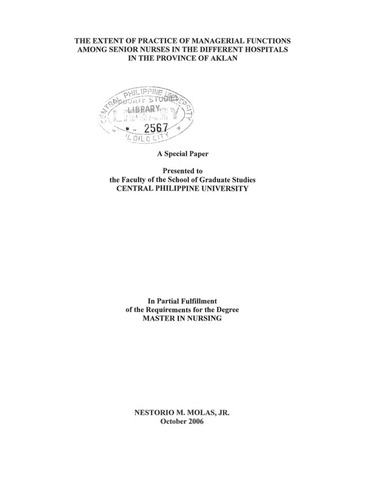 This study was conducted to determine the extent of practice of managerial functions among senior nurses in the different hospitals in the province of Aklan. The respondents of the study were the twenty - five senior nurses employed both in the public and private hospitals in the province of Aklan. The descriptive correlational research method was used in this study and a structured questionnaire served as a tool for data gathering. The data obtained from this study were processed using the Statistical Package for Social Sciences (SPSS) Software. Descriptive statistics such as range, frequency counts, percentage, mean and median were employed; Gamma test was utilized to determine the association between independent and dependent variables. The results revealed that the respondents were in their late forties, married, Bachelor of Science in Nursing graduates, had an average of 20 years nursing experience and earned with family monthly income of Php20,000.00, on average. Majority of the senior nurses performed the planning, organizing, directing and controlling functions to a great extent and on the whole practiced their managerial functions to a great extent. Only highest educational attainment among the personal characteristics was found to have a high relationship with the extent of practice of managerial functions. Since all the managerial functions were performed to a great extent senior nurse must sustain these, should attend seminars/workshops on managerial leadership, and should be provided with financial assistance in order to motivate them to pursue their master’s degree.