Knowledge and attitudes toward family planning: Their relationship to family planning practice among married men in selected urban and rural barangays in the Municipality of Leganes, Iloilo 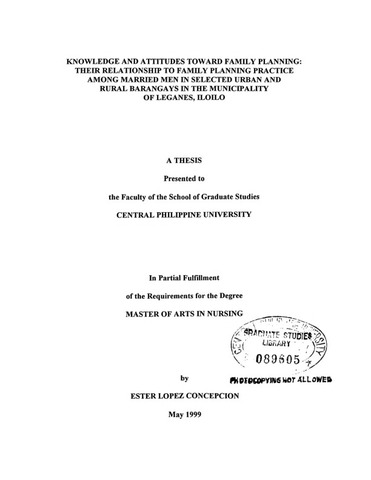 This study was conducted to determine the men’s knowledge about Family Planning (FP), attitudes toward FP and their relationship to FP practice, Three hundred twenty men were interviewed in the selected urban and rural barangays in the Municipality of Leganes: Poblacion, Guinobatan, and Camangay. The results of the study showed that the men in this study were 37 years on the average. Most of them had high school/vocational education and were gainfully working at the time of the survey. Their wives were more or less similarly educated than they were, but unlike their husbands, most of the wives were not gainfully working. On the average, the couples had four children. The men had ‘average’ to ‘high’ level of knowledge about FP, however, most of them still had misconceptions about FP methods, particularly on the side effects of male methods. A high majority (95.7 percent) of them believed that a vasectomized male could not carry heavy loads. Most of them (93.7 percent) could not identify any side effects of condom, while only a few (6.35 percent) knew that it can cause allergic reactions. The men’s attitude toward FP was favorable. Most of them favored FP (94.0 percent) and only 1.6 percent had “favorable” attitudes while 4.4 percent were “neutral” about FP. All of the men agreed that they should help in the responsibilities at home. However, a substantial population of the men think that those men who does not have many children is not very verile (59.4 percent) and 3 in 4 (77.9 percent) believe that vasectomy decreases man’s sexual satisfaction. The majority of the couples (59.4 percent) were not practicing FP. There were 40.6 percent who were currently using FP. This is lower than the national (48.1 percent) and regional (58.1 percent) levels. There were more users of modern FP methods than those using traditional FP methods. The pill was the most commonly used among the modern methods. The male methods were unpopularly, and between the two male methods, condom was more favored by men than vasectomy. Among the factors found to be significantly related to men’s level of knowledge about FP were residence, men’s and their wives’ educational attainment and work status. Educational attainment of the husbands and that of their wives were significantly related to FP practice. It was also found that men living in the urban area tended to be more knowledgeable about FP than those living in the rural areas. The college-educated men and those with wives with the same educational level were more knowledgeable about FP than those with lower educational attainment or those with less educated wives. The respondents whose wives were working had better knowledge about FP than those whose wives were not working. The college-educated men and those with wives who were also college educated were also more likely to practice FP than those with lower educational attainment or those whose wives were less educated. Knowledge about FP is significantly related to attitudes toward FP, but attitudes toward FP and knowledge about FP were not significantly related to FP practice. When attitudes toward FP, however, was controlled the relationship between knowledge about FP and FP practice was strengthened. The findings indicate that the more knowledgeable the men were about FP, the better their attitudes toward it. High knowledge about FP and favorable attitudes toward FP, however, do not guarantee FP practice. Attitudes toward FP, however, strengthens the relationship between knowledge about FP and FP practice. Considering the significant findings and conclusions, it is recommended that DOH and non-government organizations implement information, education and communication activities that include and emphasize FP male methods. Various methods of information dissemination such as, the use of comics, drama, informal education and posters in the dialect must be explored. FP programs, like FP counselling should involve not only women but also men. Pills and condoms being the most popular contraceptive methods always be available at the health center. Men can be involved as teachers/informants or as male FP motivators to male target FP users, in order to overcome gender barriers. More studies involving men must be conducted.