An evaluation and development of a low cost insulating material from clay, rice hull and ash 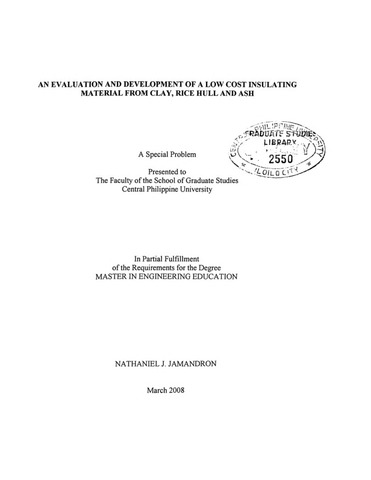 Thermal insulation is a material of low thermal conductivity. It is used primarily to provide resistance to heat flow. Clay, rice hull and wood ash were utilized as raw materials for the manufacture thermal insulation in the form of fired bricks. Brick dimensions are 250 mm by 250 mm by 30 mm. Five different proportions by mass were produced. One face of the brick was subjected to heating and temperatures of both faces were measured. Heat source was from a Bunsen burner. From these data, the temperature difference between opposite faces was computed, tabulated, and analyzed if there was significant difference among means. Recording of temperature was done at the end of every thirty seconds. This temperature difference was an indication of thermal resistance (a property of an insulation) based from Fourier’s law of conduction. Test for strength of brick was done on a UTM. Samples tested were new ones that did not undergo heating. Ultimate strength was the variable measured as all brick samples did not show yield point