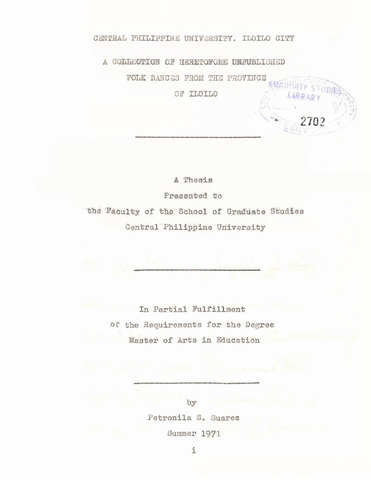 The main purpose of this study was to collect heretofore unpublished Visayan folk dances and their music before these are lost to posterity upon the death of the old folks who know and teach them. It is also hoped that knowledge of these dances will increase interest in their performance. The dances and music in this collection were learned from the old folks of the towns of Janiuay, Calinog, and Bingawan in the province of Iloilo. The authenticity of these dances and their music was established through interviews and conferences with the informants. The accuracy of the record of each step and figure of a dance was ensured by close observation of performances repeated to a point when the investigator could not see any significant discrepancy between record and performance. Corresponding music for each dance was recorded on tape. All this was finally transcribed for the piano. From the instructions drawn up by the investigator, the dances were then performed by students of Physical Education. The performances were meant to test the accuracy of the transcription and reproduction. Then the collection was later analyzed for social implications. From the study and analysis, these findings and conclusions were drawn: 1. That dances gathered from the people seemed to embody their cultural characteristics, like the traditional courtesy of the Filipinos and the modesty of their women; 2. That right here in Panay is a rich source of indigenous dances and songs; 3. That the peculiar contributions of Visayan dances to the nomenclature and repertory of Philippine dances are three "new” steps: the “ekis," the "heel and raise polka," and the "luksod.” Another contribution is a peculiar bowing, which is done sideways instead of the usual face-to-face; 4. That the dances published so far are not all there are of Philippine dances; that even in this region alone there are still untapped resources. Based on the findings and conclusions, the following recommendations were suggested: 1. More research in this particular field be encouraged a) through the awarding of research grants to qualified researchers along this line, (b) by asking colleges and universities with P. E. departments to encourage their students to discover unpublished folk dances in their respective regions; 2. A similar research along some allied field like indigenous songs and poems be undertaken; 3. The dances in this collection be published for general use so as to popularize them all over the country and thus contribute to a better understanding of the Ilongos; 4. The Health and P. E. Department include these seven new Visayan dances in an elective course to be called Philippine Folk Dances II, to follow the one required course in Philippine Folk Dances for P. E. majors; 5. These dances be integrated in the instruction in Philippine Folk Dancing in the university.