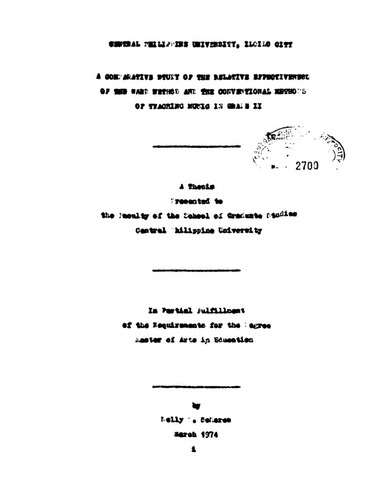 This study was an attempt to determine the effectiveness of the two methods of teaching music―the Ward method and the conventional methods―in terms of pupil achievement, as revealed by testing. Answers to the following specific questions were sought: 1. How do the two groups differ in achieving good pitch and rhythm? 2. How do the two groups differ in the written test? 3. How do the two groups differ in the practical test? 4. Does the Ward method prove more helpful to the boys or to the girls in their performance in the written test? 5. Does the Ward method prove more helpful to the boys or to the girls in their performance in the practical test? It is hoped that the results of this study will help music teachers who look for effective methods in teaching music. Supervisors of music education could use the results to help them counsel teachers. The experiment involved the seventy-four grade two pupils of Tinaytayan Elementary School, Dumarao, Capiz. The study limited itself to the measurements and analysis of the recognition and production of pitch and rhythm. The experiment lasted for eighteen weeks during which eighteen songs were taken up, following the teacher's guide issued by the Division of Capiz, City of Roxas. No intelligence test was given to the groups because of the inavailability of an appropriate instrument. The pupils were randomly divided into two groups which were equated as to age, rating in Grade I, and initial test scores. The Ward method was used with the experimental group and the conventional method, with the control group. The two groups were both taught by the researcher. The written achievement test and the criteria for rating the pupils in the practical test were prepared by the researcher with the help of three competent music teachers. Its validity and reliability were consequently established. The written and the practical tests were first administered to the subjects at the start of the experiment. During the teaching period of eighteen weeks, the classes were held close to each other in time. The hypothesis to be tested was; the Ward method is as effective as the conventional method in teaching music in Grade II. The t-test and the F-test were used and the .05 level of significance was sought. At the end of the school year, the testing administered at the beginning were repeated. Although only fifty-eight pupils completed the requirements for the experiment, they still composed equivalent groups as far as average grade in Grade I and the results of the pre-test were concerned. Computation of the t-ratio from the results of the final testing revealed that the difference between the achievement means of the two groups yielded a t-ratio of 4.05, far beyond 2.00, the critical value of t significant at the .05 level, with 56 degrees of freedom. This showed that the Ward group achieved significantly more than the conventional group. The findings also proved that the Ward group showed better achievement than the conventional group in both written and practical tests taken separately. The Ward method was also proved by the use of the t-ratio to be effective with boys and also with girls, but more as with boys, as indicated by their higher achievement quotients. Further computation for the analysis of covariance further proved that the difference between the achievement means of the two groups was significant at the .05 level. Since the two groups of subjects were successfully equated, since the test instrument was proven to be valid and reliable, and since the difference in final achievement was significantly at the .05 level, then the hypothesis was rejected, and it was concluded that the Ward method was more effective in the teaching music in Grade II. In view of the above conclusion, the following recommendations are presented: 1. The Ward method should be used in teaching music to Grade II pupils. 2. Music teachers should attend workshops, seminars, and demonstrations on the Ward method. 3. Division and district levels should hold seminars, workshops, and demonstrations on the Ward method. 4. Books and materials on the teaching of the Ward method should be provided to suit the needs of Grade II pupils. 5. Training institutions should include the Ward method among the methods of teaching music. 6. Further research on music teaching should be conducted.