Pruning and defoliation at different stages: Their effect on growth and yield of Casino 901 hybrid eggplant 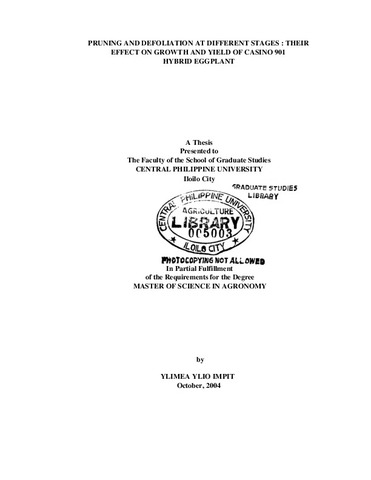 Pruning and defoliation alone and/or in combination were used in altering plant architecture of hybrid eggplant to determine their effect on growth and yield, insect population and its natural enemies, disease incidence and the benefit cost ratio in comparison with farmer’s practices. The study was conducted at the Agri-ventures and Services, Multi-Purpose Cooperative (MPC) Farm at Brgy. Singon, Tubungan, Iloilo from February 7 to June 20, 2003. Pruning and defoliation had varied effects on the growth and development of hybrid eggplant. Plants with pruned apical shoots were generally shorter than plants with defoliation of older leaves and/or in combination with removal of lower lateral branches below the 5th true leaf. Likewise, pruned hybrid eggplant had slower production of leaves, lateral branches and flowers. The prolonged physiological stress and repair of the plants injured the tissues which contributed to the delayed fruit setting, hence, fruit yield was moderately reduced compared to plants grown following the farmer’s practice. In general, the composition of arthropod species during the growth duration of hybrid eggplant showed that insect pest represents an average total of 98.90 percent compared to natural enemies (0.31 %) and symbionts (0.79 %) which are only a small portion of the percentage of total density they occupied at various growth stages of the eggplant. Among the insect pest that had greatly affected or damaged the plants were aphids and green jassid, which occurred at the early vegetative up to the reproductive stage of eggplant. It was further observed that the 40 to 60 % damage incurred by eggplants from green jassid and aphids is tolerable due to the development of new leaves on nodes where leaves had been defoliated. The shoot borer/ fruit borer occurred at a later stage of growth and consistently damaged the shoots and fruits from 5.90 to 49.44 % in plants with pruning and defoliation treatments and from 31.16 to 50.87 % in plants in the farmer’s practice plots. Phomopsis and Phytopthora fruit rot were the only common diseases observed, both with a low infection that range from 0.00 to 25.58 %. Pruning of apical shoots resulted in a yield reduction of almost 50 % compared naturally grown eggplant following farmer’s practice while defoliation resulted in a 28 to 37 % yield reduction only up to the 4th priming. Based on these results, weekly defoliation of older leaves accompanied by the removal of lower lateral branches below the 5th true leaf and/or weekly defoliation of older leaves alone are very promising as a means of altering plant architecture in exploring other pest management strategies without the use of insecticide which gave the highest benefit-cost ratio of 2.12 and 1.99, respectively.