The effect of mathematical games on anxiety and achievement 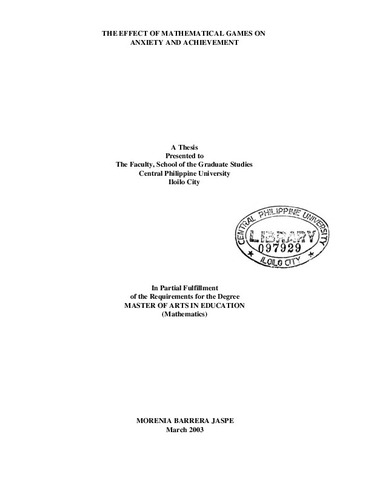 The present study ascertained the effect of mathematical games on anxiety and its effectiveness in the teaching of mathematics. The effect of games on anxiety was determined through the mathophobia check up, while its effectiveness in the teaching of mathematics was measured by the students’ performance in a mathematics achievement test. This experimental study was conducted in July 22 to September 2, 2002 with thirty first year Bachelor of Education students of the West Visayas State University, Janiuay Campus as subjects. The students were divided into experimental and control groups. Equality of two groups was established through paired matching based on their scores in Mathematics and English in the college admission test as well as their grades in Mathematics and English in the secondary level. True experimental design was used by the researcher. Means and standard deviations were utilized to describe the subjects’ level of anxiety and mathematics achievement. On the other hand, t-test was used to describe the significance of the differences between the variables identified set at 5% level of significance. Findings The major findings of the study showed that games did not bring significant change on students’ anxiety. In addition, the use of mathematical games in teaching did not significantly improve students’ achievement in mathematics although the experimental group scored better in the achievement test. Conclusions In the light of the foregoing findings, perhaps it can be deduced that since games did not significantly reduce anxiety, the latter can be overcome by other means. Whether or not one incorporates mathematical games in mathematics teaching, students’ achievement remains the same as in traditional teaching. Recommendations Based on these findings the following recommendations are advanced. If mathematics anxiety has been established to hamper mathematics learning, a different strategy be employed in mathematics teaching and its effect on anxiety and achievement be also investigated. Since the use of games did not significantly improve performance of students, it may or may not be incorporated in the teaching of mathematics. Further investigations such as on the length of time needed to overcome anxiety are worth the teachers’ while. In relation to this, another area worth exploring is whether earlier games intervention e.g. preschool and elementary, is a lot better than one administered during adolescence and afterwards.

Master of Education major in Mathematics