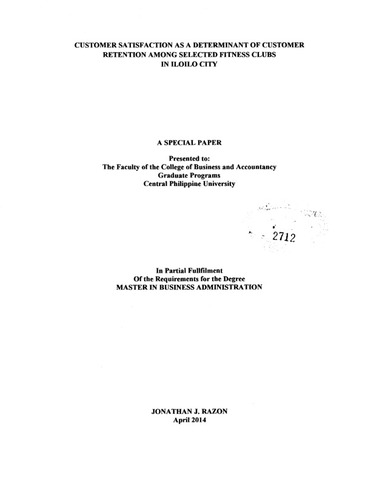 Fitness has been one of the largest and fastest-growing industries in the world in the past decade. The Philippines is no stranger to the rapid growth and progress of fitness and a lot of organizations, both big and small, are looking to capitalize on this opportunity. An industry as progressive as this is not without its gaps. ‘Customer Retention is a major problem in the fitness industry and it may well be the industry’s single largest issue (Fuyala, 2011). Customer satisfaction has been identified as a driving force in retaining existing customers. This study was conducted to determine customer satisfaction as a determinant of customer retention among selected fitness clubs in Iloilo City. It described the profile of respondents such as age, sex, occupation and income level. Customer satisfaction was measured in the areas of instructors, equipment, facility, value for money and social environment. Furthermore, this study was conducted to determine if there was a significant relationship between customer retention and customer satisfaction among selected fitness clubs in Iloilo City. Finally, this study hypothesized that there was no significant relationship between customer retention and the level of customer satisfaction among fitness club members. Data was gathered using a self-administered questionnaire which was given to fitness club members in selected establishments in the area. Statistical software (SPSS 17) was used for the analysis and interpretation of data. Findings of the study show that more than half of fitness club members are in the “Young professional” segment. In terms of sex, the male segment comprises the majority of the fitness club population. Office workers and students are the majority composition in terms of occupation and nearly one-third of respondents have a monthly income level of twenty thousand pesos (P20,000) or higher. Respondents stated that the overall satisfaction level of fitness clubs exceeded their expectations based on the areas of quality of instructors, equipment, facility, value for money and social environment. The retention rate is also high for these fitness clubs as nearly 9 out of 10 members (87.3 percent) indicated that they intend to renew their membership and remain active in the near future. Quality of instructors, equipment, value for money, and social environment had a significant relationship with a member’s intention to renew their membership. On the other hand, the social environment has been identified as the primary factor in a member’s intention to stay or leave the fitness club. Overall, customer retention had a highly significant relationship with customer satisfaction.