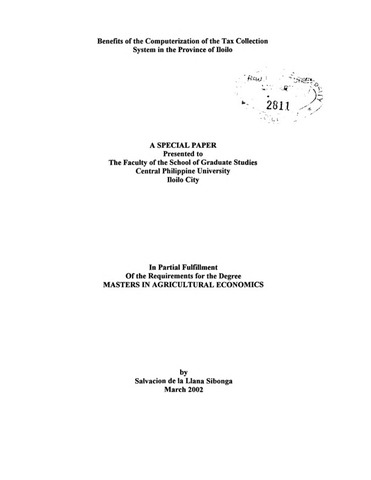 The Real Property Tax Assessment (RPTA) Project of the Province of Iloilo is a long-range project designed to strengthen the capability of the provincial government in project management and maintenance operation and improving its financial and fiscal performance. The MIS-EDP office of the Province of Iloilo developed a computer program for RPTA and was utilized for the Real Property Tax Assessment and Collection System (RPTACS) project of the province. The project the following components: tax mapping operations, records conversion/management and tax collection. Enforcement was lately expanded, with the inclusion of Data Computerization of the records of both the Assessor’s and Treasurer’s offices. Availing of the World Bank assisted project through the Department of Finance and the CIDA-Local Government Support assisted project, the province embarked on a P10M and P1.649M, respectively, which was started June 1997 and ended up December 31, 1999. Presently, the RPTA Program of the province of Iloilo has already been computerized province-wide, all notices, reports including the official receipts are computer- generated, enhancing the efficiency of the assessment and collection functions of the province. The computerization of the tax collection system in the Province of Iloilo was observed to have resulted to an efficient and more improved fiscal administration. The Province of Iloilo has reported an increase of 115% collection efficiency over target set by the DOF for the year 2001. Moreover, the reported actual collection of real property taxes for the year 1999 was P513M. There was an increase of 19% collection for the year 2000 in the amount of P609M. Year 2000 is said to be the year when computerization took effect. Tax bills and notices can now be generated in a matter of hours and tremendously improved the tax information system of the province and municipalities. Assessment documents, issuance of tax declaration/certification and all other assessment records including tax-mapping records could now be done in a matter of minutes. On top of it, the manpower requirement was also reduced. Duplication of records was minimized and taxable values throughout the province were updated. Likewise, easy monitoring and checking of all assessment records for both at the provincial and municipal level are readily implemented. Overall, this very laudable project has efficiently and effectively increased work processes and level of work productivity. The greater impact of the project has resulted to the significant increase of tax collection of the province as reported for the period covered after computerization.