Personal and work-related factors associated with compliance with R.A. 9246 among library personnel of state universities and colleges in Panay 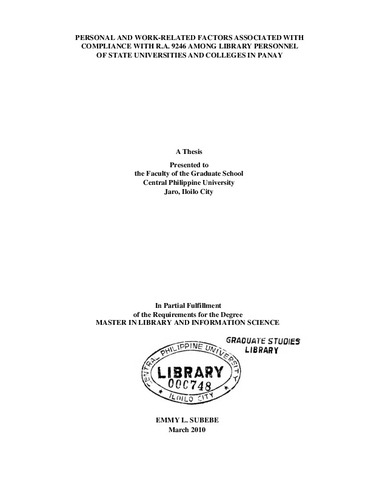 The study aimed to determine the compliance with R.A. 9246 “The Philippine Librarianship Act of 2003” among library personnel of State Universities and Colleges in Panay. Such compliance was evaluated along personal and work-related factors deemed to have some influence upon it. The study was conducted in seven state universities and colleges in Panay namely: Aklan State Universities (ASU), Capiz State University (CapSU), Iloilo State College of Fisheries (ISCOF), Northern Iloilo Polytechnic State College (NIPSC), University of Antique (UA), Western Visayas College of Science and Technology (WVCST) and West Visayas State University. Included were the main and external campuses. A three-page researcher made-questionnaire was distributed to 58 library personnel who were holding permanent position in the institution. All of the respondents were female, mostly married and majority were aged 41 and above. Half of the respondents were bachelor’s degree holder and mostly holding the college librarian position. Of the 58 respondents, 46 (79.31 percent) were license holders which made them compliant with the provision of R.A. 9246. Library personnel were fully compliant concerning the practice of librarianship, meaning they always practiced the functions expected of them. Majority of the respondents were members of national organizations for librarians and were able to develop professionally by attending library related seminars and conferences. Personal characteristics like age and work-related characteristics like position, educational attainment and membership to regional organization were found to have an effect on their compliance with licensure, except their civil status, which had a negligible association. As to the relationship between the personal and work-related characteristics of the library personnel and their compliance with the provision of R.A. 9246 in the practice of librarianship, the result of the study shows a negligible relationship except with their position. Personal and work-related characteristics of the library personnel had some bearing on compliance with the provisions of R.A. 9246 in terms of membership with national organization, but not membership with regional organizations. Regarding professional development, personal and work-related characteristics had no relationship with their compliance with the Act except with their position which had a slight relationship. Despite the good number of compliant respondents, 46 out of 58, there were still library personnel in state universities and colleges who were not professionally qualified to render library services as required for licensure per R.A. 9246. Nearly 21% (12) did not have a license. Half of the non-compliant respondents were not graduates of library science or related courses and some library personnel were instead faculty members designated as library-in-charge. A number of these non-compliant were undergraduate library science majors, but as yet were unable to pass the licensure examination for librarians. These findings, indeed, show the extent to which the legal provisions for profession are complied with or have yet to be met by the public academic library sector in order to guarantee quality library service as befit the librarian professional image. The general observation that position had some degree of positive relationship on compliance which implies that many library personnel strive for licensure as they aim for higher positions, some incentives like better compensation for professional qualified librarians be initiated. On the other hand, authorities like the Philippine Regulations Commission and Board for Librarians should be aware of the status of the library personnel in state universities and colleges regarding their compliance with the provisions of R.A. 9246 and consider steps towards the full professionalization of librarianship.