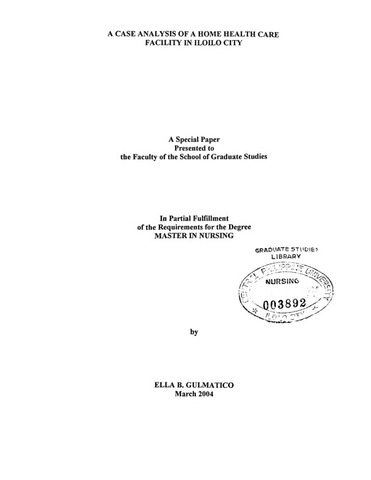 This research was a case study or an in-depth analysis of the institutional functioning of Home Health Care Nursing Agency in the City of Iloilo. The purpose of this study is to determine the basic concepts, operations and principles involved in running a home health care agency. It was also intended to describe the organizational structure and patterns of one home care agency in the City of Iloilo in terms of historical and operational data, problems encountered and measures or solutions applied. The data obtained from this investigation were purely qualitative and were gathered through formal interviews, key-informant interviews, focus group discussions, observational analysis and review of records of the institution. Results of the study revealed that apex Home Care Agency, Inc. was established in 1997 and is one of the two home care agency in the City of Iloilo. It is a nongovernmental agency registered with the Securities and Exchange Commission. The services of the company include health insurance for its subscribers and members, medical services, home care and home visiting, laboratory services, pharmacy and ambulance services. The Company is loosely organized with seven (7) Board of Directors. It is manned by a manager, chief of each department, like laboratory, nursing, ambulance and medical services. There are nurses involved in rendering home care. Further interviews revealed that the company is losing due to financial problems and mismanagement. Key informant interviews revealed that there was no feasibility study or market survey conducted before the operations. Primarily, the company thought that there is only one competitor home care agency in the City to name Aranda Home Care Services and therefore there is no so much competition, but they failed to come up with many subscribers and members to sustain the operations of the company. The public’s attitude towards home care services is not that favorable since they prefer to let their folks stay in the hospital for care and management rather than in their home to be visited. The manager attributed such failure to factors like financial constraints, mismanagement. Moreover, the company did not foresee the poor acceptance of people towards home service such concept is new to the public, thus they have poor perception about it. Moreover there was a lack of intensified advertisement promoting such program to the community.