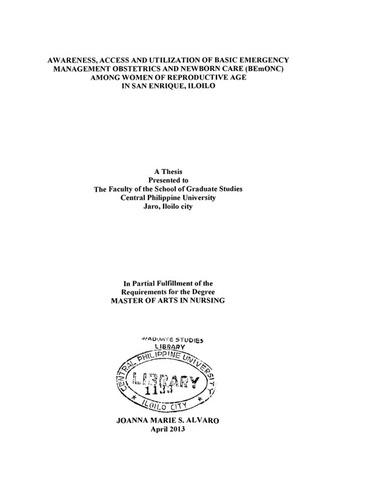 Women’s utilization of maternal health care facility is an important health issue with regard to the wellbeing and survival of both the mother and her child during childbirth. There are certain factors however that inhibit pregnant and women in patronizing maternal health facilities during childbirth. Antenatal care coverage is an indicator of access and use of health care during pregnancy. It constitutes screening for health and socioeconomic conditions likely to increase the possibility of specific adverse pregnancy outcomes, providing therapeutic interventions know to be effective; and educating women planning for safe childbirth in a facility- based deliveries like in Basic Emergency Management Obstetrics and Newborn Care, emergencies during pregnancy and how to deal with them. This descriptive correlational study was conducted to determine the awareness, access and utilization of Basic Emergency Management Obstetrics and Newborn Care among women of reproductive age in San Enrique, Iloilo. The 346 respondents of this study were selected using a stratified random sampling technique out of 3,532 from 28 barangays in San Enrique. The respondents were interviewed between October 20 to December 15, 2012 using a structured interview schedule prepared and validated prior to actual data collection. For univariate variables frequency distribution, percentages, and mean were utilized to describe the data while Chi square and Cramer’s V were used to analyze and determine relationships and differences between variables. The results of this study revealed that majority of the respondents were between 29-38 years old, married and mostly high school educated. Most of them were unemployed with a monthly family income between 1,000- 5,000 pesos. Most were Roman Catholic and presently not pregnant during the interview. Most of the respondents are multigravida and multipara. More than half of those who were pregnant for the last 5 years had their pre-natal check-up at San Enrique Rural Health Unit, and the 38 percent had their prenatal check up at the hospital. However, during childbirth almost half of the respondents opted for home delivery. Most of the respondents suffered no complication throughout the duration of the pregnancy. Most of the respondents were highly aware about the Rural Health Unit as a Basic Emergency Management Obstetrics and Newborn Care (BEMoNC) facility and its services. Their sources of information were barangay health workers in their satellite barangay health station. They disseminated the information about the antenatal package of the RHU facility. Majority of the respondents find the Rural Health Unit as highly accessible in terms of geographical, financial and cultural aspect. This study also found out that half of the respondents have utilized the services of the RHU as a BEMoNC facility and most of them have utilized the prenatal package but not the childbirth and post natal services. Hypothesis testing showed there was a significant relationship between access to health facilities and educational level, and income, obstetric score and pregnancy status while there is no significant relationship between access and civil and employment status and furthermore, there is a significant relationship was found between utilization and employment status, income level, educational status and OB score. Findings further revealed that there is a significant relationship between awareness and utilization and there is a significant and relatively strong relationship between accessibility and utilization.