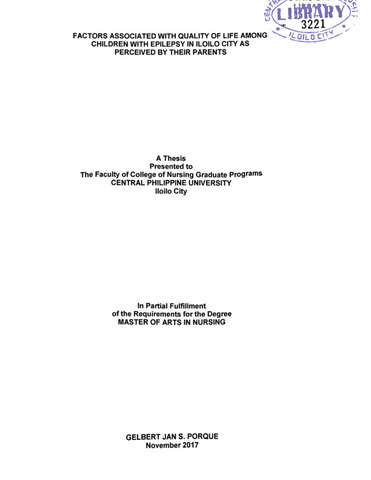 Quality of life (QOL), composed of four domains (cognitive, emotional, social, and physical is a recent focus of management of chronic diseases. This study aimed to determine the factors that can influence the QOL of CWE (children with epilepsy) including CWE’s characteristics, parent’s characteristics, knowledge about epilepsy, and adherence to the prescribed regimen. One-shot survey design was utilized. SPSS 20 was used to analyze the data. There were 72 respondents from the pediatric neurology clinics in Iloilo City, Philippines. A self-administered questionnaire, including QOLCIE-55 (Goodwin et al., 2015), was used for data collection. Results of the study showed that epilepsy is prevalent among female adolescents. Most had their first seizure attack when they were pre-schoolers and reported having 0-5 seizures for the past four months. Although knowledge is high, misconceptions about the condition still exist. Adherence to the prescribed medication regimen was also poor. Cognitive, emotional, social, and overall QOL were high but physical QOL was low. Parent’s sex, educational attainment, and monthly income influenced knowledge about epilepsy while the parent's age only had a bearing to adherence. Schooling status was a good predictor of the QOL in all domains. Age of seizure onset also had a bearing on all areas except emotional functioning. Chronological age is related to cognitive, social, and overall QOL while family income influenced the emotional, physical and overall QOL. Increased knowledge about the condition did not equate to increase in adherence to the prescribed regimen. The overall QOL and social domain were influenced by both knowledge and adherence scores. With these findings, the QOL of CWEs must be given attention by healthcare practitioners and in academic institutions.