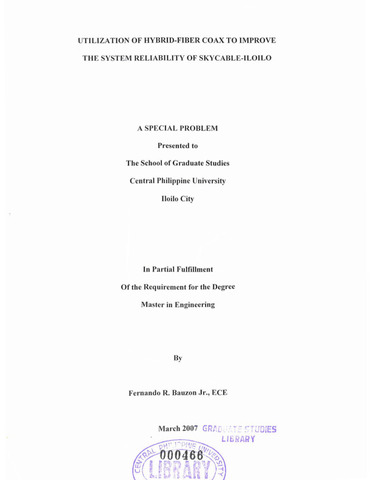 Coaxial cable is the delivery medium traditionally used for delivering cable television to the home. It provides broadband transmission capabilities for the delivery of full-motion video. At present, SKYcable-Iloilo had utilized the tree-branch CATV design and its operations covers the towns of Pavia, San Miguel. Leganes, and the City of Iloilo. However, as the network size increases, more equipment are needed and installation of these will degrade the performance of the entire system. These are the primary shortcomings of the company considering that several technical related problems are expected and were even encountered with the present system that now affects the system reliability performance and cannot be avoided unless something is done with the existing system such as incorporating of alternative and appropriate technology. There are many alternative technologies available in the market but several factors must be considered such as its viability on the existing design and service of the company. With the application of new technology, the company will look forward to a better service thereby improving the performance of the system reliability, enough space for future expansion, and prepare for future services.