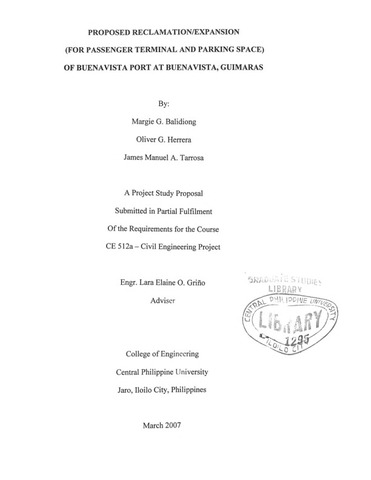 The scope of this project study includes the preparation of plans for the construction of the passenger terminal and parking space at Beunavista Port, Buenavista Guimaras. Insufficient parking spaces are the major problems encountered in the area which causes traffic congestion and unorganized parking of vehicles. The group have concluded that the reclamation of the port and the construction of a terminal is a necessity for the convenience ofthe public especially for vehicle drivers. The proposed structure was designed using the Ultimate Stress Design (USD) method for concrete and the American Institute of Steel Construction (AISC) Manual and ASD (Allowable Stress Design) for steel were used as basis for the design of the structural members. The designed method was based from the National Structural Code of the Philippines (NSCP) and American Concrete Institute (ACI) Code. The total estimated cost of the project is twelve million, five hundred thirty seven thousand, seven hundred sixty pesos and forty one centavos (PhP 12,537,760.41). The said cost was computed based on the itemized expenses for material, and equipments as shown in the detailed costs and estimates. The fund will come from the Department of Transportation and Communication together with the Municipal Government of Buenavista. The Bar Chart was used in preparing the work schedule. The project has duration of 12 months or 365 calendar days.

Bachelor of Science in Civil Engineering