The relationship between hygienic practices and occurrence of asymptomatic bacteriuria in female freshmen students of Riverside College, Bacolod City 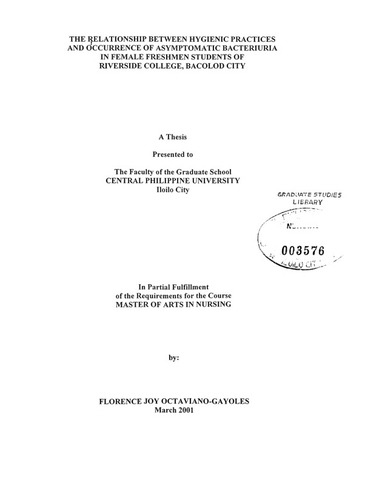 This investigation was conducted to determine the association between the hygienic practices and occurrence of asymptomatic bacteriuria female freshmen students of Riverside College, Bacolod City. It also aims to determine the student's knowledge regarding Urinary Tract Infection (UTI) and determine the past medical history in relation to UTI. The respondents of this study included 133 female freshmen students of Riverside College, Bacolod City in the second semester in school year 1998 - 1999. They were selected through stratified random and systematic sampling with a random start from the official list of enrollees in the second semester of school year 1998- 1999 from the Registrar’s Office. A questionnaire was distributed to the female freshmen students and each were requested to submit a urine specimen for microscopic analysis. Data processing and analysis were done with the aid of the Microstat or Statistical Package for Social Sciences (SPSS) as well as Microsoft Excel. Data gathered were used with specific statistical tools for analysis and interpretation, namely, Frequency Distribution and Percentage, Goodman’s and Kruskal's Gamma (G) and Cramer’s V test for association. The level of significance of the relationship between variables was set at 0.05. The findings of the study revealed that the respondents have good hygienic practices in terms of bathing, toileting, grooming and clothing. With regards to their knowledge on urinary tract infection and asymptomatic bacteriuria, the respondents had above average scores. The study revealed that majority of the students has not visited a physician for signs and symptoms related to Urinary Tract Infection. Only about 21 percent of the female freshmen students in the study have positive results in their urine specimen for presence of bacteria or have asymptomatic bacteriuria. There is no significant association between hygienic practices and knowledge nor is there an association between hygienic practices and past medical history. There is no association between hygienic practices and occurrence of asymptomatic bacteriuria. With the findings of the study, the researcher recommends an inclusion of hygiene in health related courses and to study the college aged women in Riverside College, not only the freshmen. A barangay survey could also be done as part of Community Health Nursing to assess the status of the women in the barangays regarding hygienic practices in relation to occurrence of asymptomatic bacteriuria.