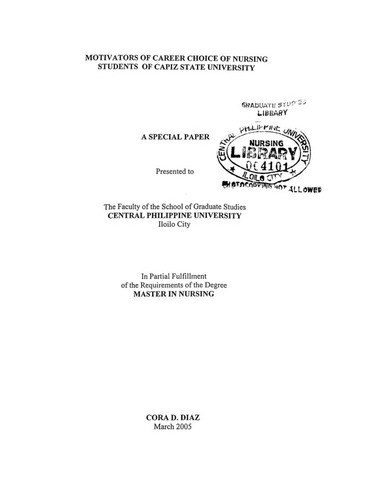 This study was conducted to determine the factors that may have motivated students of Capiz State University (CapSU) to take up nursing and to find out further whether selected personal characteristics of the students are significantly related to their level of motivation to take up the course. This is a descriptive study that utilized the survey design. Data were gathered using a questionnaire administered in the classroom during a class schedule. Data were computer-processed and analyzed using mainly descriptive statistical tools, particularly, measures of central tendency, frequency distribution and crosstabulations. The chisquare (X2) test was used to determine whether significant relationships exist between certain variables and students' level of motivation to take up nursing. Major Findings of the Study Most of the nursing students of CapSU were females who belong to a family of more than three members. The mothers of most of the students were not gainfully employed, but the fathers of most of them were employed. Both parents of more than one-third of the students were college graduates. The working mothers of most of the students were mostly teachers; while their working fathers were mostly self-employed. Their average monthly family income was P 11.767.70. The number one reason given by the students for taking up nursing is that “nursing is highly in demand abroad,” followed by “choice of parents and relatives for them" After graduation, most of them plan to review for the nursing board and take the board examination, after which they “hope to go abroad so they could help their family.” Their desire for professional growth exerted the greatest influence on their decision to take up nursing. Economic factors, prestige/recognition and people-related factors, on the other hand, have moderately influenced them in their nursing career choice. Relational analysis revealed that sex. family size, parents’ occupational status and educational attainment and monthly family income are not significantly related to their extent of motivation to take up nursing. This means that the students’ decision to enroll in the college of nursing is independent of their background characteristics. Irrespective of sex, age, civil status, family size, occupational status, educational attainment of parents and monthly family income, their level of motivation to take up nursing is moderate to high. Conclusions Based on the findings of the study, the following conclusions were made: 1. Female students dominate nursing department. This further reinforces the idea that nursing is a woman’s profession. Being nurturing in nature, women are more likely than men to be attracted to nursing care. 2. Education and economic advantage characterize parents of nursing students. The nursing course is generally costly and therefore, the students must have adequate financial support. Even if the tuition of the nursing program of CapSU is much lower than that of private schools, it is still the highest in the university. 3. The respondents’ desire for professional growth apparently attracted the students most to nursing. The effect of economic factors, prestige/recognition and people factors on the students’ career choice is moderate. 4. The students recognize the high demand for nurses abroad, and many of them be a sure “passport” to travel abroad. 5. The students’ eagerness to help their family is an indication of altruism among the nursing students. 6. Certain variables such as: sex, family size, parents’ occupational status and educational attainment, and monthly family income have no significant influence or bearing on the student’s decision to take up nursing. Recommendations Based on the findings and conclusions of the study, the following recommendations are formulated: 1. There should be a standard set by the Commission on Higher Education (CHED) for those schools that offer the nursing course, to produce quality graduates who can compete globally. 2. It should be stressed to the nursing students that their profession is not only for earning dollars but it is a noble profession that allows the nurses to serve the community and at the same time gain the respect of the community for their service and altruism. 3. Student nurses should love their course and profession because as a nurse they will be ethically and legally accountable for actions they take in the course of nursing practice. 4. In the choice of career, parents should allow their children to decide on what course to take. Parents can advise and provide guidance but not to do the choosing themselves. 5. Studies on students career preferences/choices should be further encouraged. Future studies should also take into consideration other variables and factors that could influence students' decision to take up a course. Researchers can also conduct a study covering more students and institutions. 6. Further validation and revision of instruments for this purpose should also be encouraged.