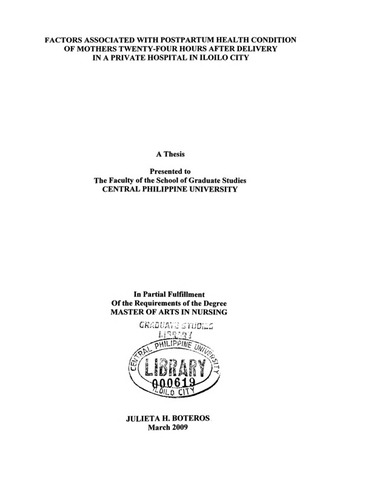 This study aimed to determine the factors associated with health condition of mothers twenty-four hours after delivery. Specifically, the objectives of the study sought to determine (a) the sociodemographic economic characteristics of the respondents in term of age, civil status, educational attainment, work status and income, (b) prepartum history as to their total number of pregnancy, total number of children and prenatal care, (c) social support as to presence of significant others present during labor and delivery, (d) psychological condition as to level of anxiety during labor and delivery, (e) health condition of mothers twenty four hours after delivery. This is a descriptive relational study that used one shot survey design. The respondents were the mothers who delivered normally after twenty-four hours at Iloilo Mission Hospital from October 6-26, 2008. Mothers with medical problem like diabetes mellitus, hypertension and cardiac condition were not included in the study. A self administered questionnaire was used as data gathering tool. The instrument was developed from literature review, related researches and experiences. A researcher made questionnaire based on objectives of the study was administered. Frequency distribution and measure of central tendency were used for descriptive analysis while Chi square and Gamma were used to test the association of variables. All results were computed using the Statistical Package for Social Sciences (SPSS). The following findings were revealed in this study. More than half of the mothers were 26 years old and over while twenty-four or forty-two percent were between 18-25 years old. The youngest among the respondents was 18 years old and the oldest was 39 years old. The mean age of the respondents was 27. Forty-nine (86 percent) of the respondents were married while eight (14 percent) of them were single. Most of the respondents attained college level; only three (5 percent) attained high school level. The respondents’ family monthly income ranges from Php 1,500 to Php 100,000. Nearly half (46 percent) of the respondents has a family income below Php 10,000. Sixteen (28 percent) have a monthly family income of Php 10,001 to Php 20,000 while fifteen (26 percent) has a monthly family income of Php 20,001 and over. The mean family income among the respondents was Php 18, 515.79. Thirty-four (60 percent) or more than half of the respondents were not working and were mostly housewife. Twenty-three (40 percent) mothers were working. Among those working, seven were government employees while the rest work with private offices. Forty-three (75 percent) of the respondents, total number of pregnancy ranged from one to two while fourteen (25 percent) had three and more pregnancies. Fifty-one (89 percent) of the respondents had one to two children while six (11 percent) had three or more children. Majority of them received adequate prenatal check up, ten (17 percent) had inadequate prenatal check up while two (3 percent) never had a prenatal check up. Husbands and partners are the major support of the respondents. Most of the respondents had mild level of anxiety and more than half of had good health condition twenty four hours after delivery. There is no association between health condition and the socio-demographic-economic characteristics of mothers such as age, civil status, educational attainment, monthly income, work status and their social support during labor and delivery. However there is significant association between work status and postpartum health condition of mothers twenty-four hours after delivery. There is also association between total number of pregnancy and psychological condition. Based on the findings of this study, the researcher concludes that the good health condition of the respondents may be due to improved prenatal services so that the literacy and know-how of the respondents are commendable. Most of the respondents are college level which makes it easier for them to understand the care and the health measures they were taught. Further similar study is recommended for a longer time and on more heterogeneous level. Psychological level of the respondents should be assessed during labor and delivery so counseling can be done to those who are moderately to severely anxious. The private hospital where the study was conducted should maintain the standard of the health care services they offer because the result of the study showed good health condition for the respondents at the time of the study.