Attitude and needs of potential learners: As a basis for the development of e-learning platform 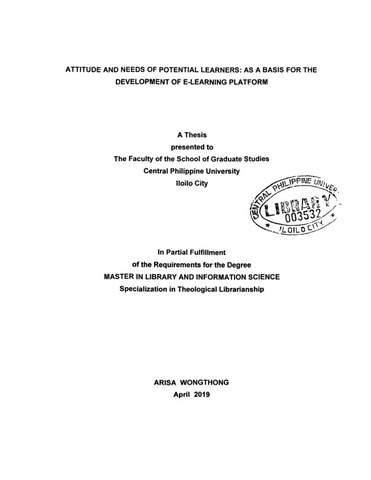 E-learning is emerging as the new paradigm of modern education. This is a descriptive correlational study which was conducted to determine the level of attitude and perceived needs of potential learners toward e-learning. The respondents of this study were 202 church members of the Church of Christ in Thailand. They were chosen through accidental sampling. The researcher examined the personal characteristics of the respondents in terms of their gender, age, marital status, highest educational attainment, e-learning exposure, the frequency of internet use, number of sources accessed, frequency of library use, their level of attitude towards e-learning and their level of perceived needs for e-learning. The instrument used in this study was subjected to content validation and reliability testing. Frequency distribution, percentage, Crammers’ V and Gamma were used to analyze the data gathered. The results of the study indicate that most of the respondents were female, single, holders of bachelor’s degree and were 21 to 40 years old. Most of them have exposed been e-learning and almost 9 in every ten of them spent no less than 2 hours on the internet each day. Six to seven for every 10 respondents had at most one information sources accessed through the internet. Three to four for every 10 potential learners have used the library for no less than twice a month, and extends up to almost every day. Seven in every 10 potential learners were highly in favor of e-learning they are in great need for e-learning. Their level of attitude greatly enhanced their level of perceived needs toward e-learning. It is worth noting that e-learning is a good platform for the SOM program that should be advertised or promoted, for its ease and convenience in earning a degree. The findings of this research can be used as a basic guide for developing an e-learning environment.

Wongthong, A. (2019). Attitude and needs of potential learners: As a basis for the development of e-learning platform (Unpublished Master's thesis). Central Philippine University, Jaro, Iloilo City.

Church of Christ in Thailand (CCT)