Advocacy in nursing: Perceptions, attitudes and involvement of nurses in a government hospital 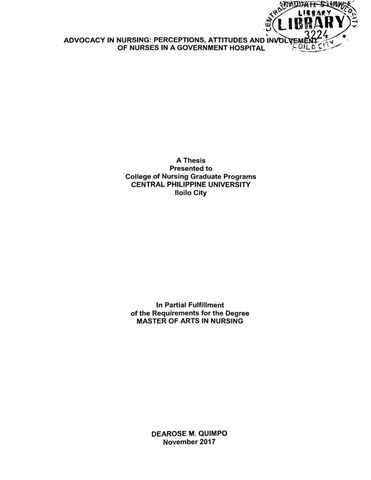 The healthcare system is becoming more complex because of the continuous development of medical technology and new systems requiring multiple medical disciplines in dealing with the patient’s healthcare. Decision-making with regards to the treatment and continuity of care is difficult to obtain, leaving the patient vulnerable and helpless. This study aimed to determine the correlation between nurses’ perceptions, attitudes and involvement in patient advocacy among the 156 nurses in a government hospital in Aklan using a descriptive-relational design. Specifically, it tried to determine the relationship between the respondent’s personal selected characteristics such as age, years of experience and area of assignment, and their perceptions, attitudes, and involvement on patient advocacy. A modified questionnaire was used and analysis of data involved the use of both descriptive and inferential statistical tools. Most of the respondents were 30 y/o and below, had work experience of 5 years and below, and assigned at the medical-surgical areas. Perceptions of patient advocacy among the nurses were positive in general (87.2%). Most nurses possess a favorable attitude towards patient advocacy (78.8%). Majority of the nurses have high involvement in patient advocacy (70.5%). The perceptions of the respondents were influenced by age while attitudes were influenced by the area of assignment. Years of work experience has a significant bearing on the involvement in patient advocacy. Nurses’ involvement was influenced by their perceptions. Furthermore, there is a significant relationship between the nurses’ perceptions and involvement when attitude was controlled. Those respondents who perceived positively were highly involved only among those who have favorable attitude. To develop a more favorable attitude towards patient advocacy, it is recommended that factors affecting the nurses’ perceptions may be further explored. If the idea about nursing advocacy is sufficient and understandable, correct perception would be gained, thus a favorable attitude would encourage nurses to engage in activities that involve patient advocacy.