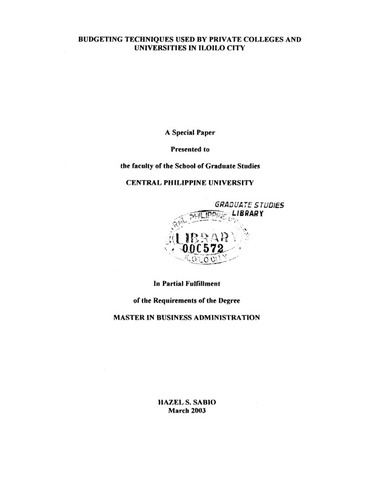 The purpose of this study was to determine the prevalent budgeting techniques used by budget officers of private colleges and universities in Iloilo City. The study focuses on budgeting process, planning, implementation and control. This study also sought to find out whether the budgeting techniques varied when respondents were grouped according to work experience, educational attainment and job designation and when the institutions were grouped into religious and non-religious type, category and kinds of administrators. The target respondents of this study were the budget officers of 24 private colleges and universities in Iloilo City however, only 13 of these were successfully interviewed. Of the 13 three were from universities and ten were from private colleges. The instrument used was a structured questionnaire which was divided into three parts, the personal data of the respondent, and the profile of the institution where the respondent is employed, and the questions on budgeting techniques applied in the planning, implementation and control stages of the budgeting process. To test for differences between and among means the T-test and One-way ANOVA were used respectively. Data were processed with the aid of Statistical Package for Services and Solution. Major Findings The findings on this study revealed that the budgeting techniques used in the various stages of the budgeting process by private colleges and universities in Iloilo City are as follows. Budget planning and making stage In the budget planning stage, the most frequently used techniques were the adoption of long term development plan”, “ setting of guidelines by the Board of trustees or Directors for annual budget preparation”, and “ the recommendation of the school president of his annual priorities before the finalization of guidelines for budget making”. The rest of the activities are either occasionally or seldom used. It was observed also that most of the activities in the budget planning stage were functions performed by top management. In the budget making stage, “the recommendation of the school president for approval of the annual budget” was the most frequently used. This is followed by "setting of deadline for budget making” and “the assigning of amount to all plans of activities”. The rest of the activities were performed on occasional and seldom basis. Most of the functions performed are the job of the middle management. The analysis for difference in budgeting practices according to various factors such as work experience, educational attainment, job designation, type and kinds of administrators shows that the extent of usage of each of the techniques in the budget planning and making phase do not significantly vary according to respondents. On the other hand, it varies significantly according to type of administrators and the category of the school. The variations as to type of administrator, shows that the non-religious institutions has better techniques over religious for it encouraged involvement of each department and the personnel behind. While variations of budgeting techniques according to school category, showed that the university used better techniques over the colleges. Budget Implementation Stage In the implementation stage, the most frequently used techniques were “ the making of request for funding, every time an activity is due”, “ slashing of costs despite approved departmental budget and “ use of computer system to aid budgeting process”. On the whole the test for difference in extent of usage of the technique do not significantly vary according to work experience, educational attainment, job designation, category of the school and ownership. However, the techniques significantly vary according to type of administrators. Control Stage In the control stage, the most frequently used techniques were “the release of funds on a per activity basis”. This is followed by the prerogative of the budget officer or authorized body to dis-approved funding whenever necessary” and the “establishment of standard of performances” together with “the comparison of actual departmental performances with standards”. On the whole, the test for difference in extent of usage of techniques do not significantly vary according to selected factors such as work experience, educational attainment, job design at ion, type of administrators, category and ownership of the institutions. Conclusions In conclusion, budgeting techniques used in the planning and making stage starts with the chief executive officer and his/her staff. It conforms with the concept of Site based budgeting, where plans of activities and its corresponding budget funds were made at each decision units or departmental levels, a level closest to the students. The budget making process is consistent with the accountability movement. On the other hand, the techniques used in the budget implementation and control stages, generally were strong and stringent. It utilized a computerized system of monitoring to ensure adherence to plan of activities and target dates. It adheres with standards of budgetary control where actual activities are compared with standards. Analysis of variance were made and used as reference for the next budget period. Meanwhile, the extent of usage of budgeting techniques is affected by type of administrators and category of the school. As a whole the analysis of difference in the extent of usage under these two factors reached a significant level. All other selected factors such as work experience, educational attainment, job designation and ownership do not affect extent of usage of budgeting techniques in all stages of the budgeting process. It is recommended in this study that in order to allocate efficiently the limited funds of the institutions and address properly its priority programs, the small, new and other colleges with no established budget planning and making process to consider adoption of regular budget planning and making. Religious institutions who still adhere to autocratic governance, should encourage participation of its employees in the budget planning process. Those directly concerned with budget implementation should be involved in the budget planning to make them feel that they are part of the organization and the Institutions with centralized budgeting, should start to delegate budget planning and making so that a realistic budget will be made and departmental concerns will be properly addressed.